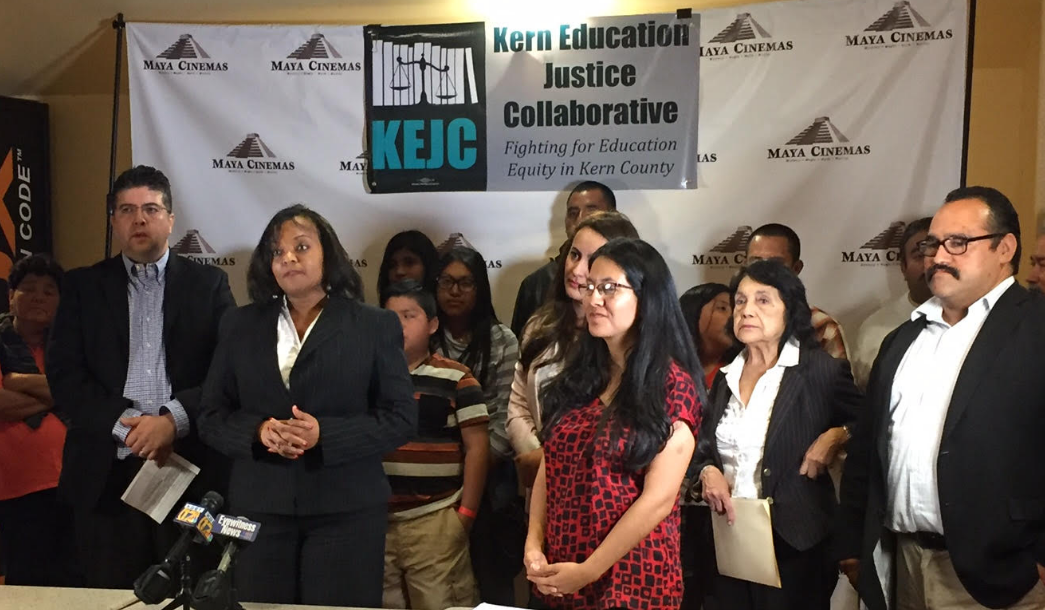 Community residents gathered recently for a screening of a short film highlighting the negative impact of suspensions and expulsions on students of color.

The issue is one that sits close to home for many families here in Kern County, where racial disparities in school discipline have long been an issue.

The film, StrikeOut, played to a packed house at the Maya Cinemas on March 28. This was the first time that the film was shown. The film was written and produced by Miguel Orozco, and the screening of the film was organized by Novelas Educativas, The Dolores Huerta Foundation, Kern Education Justice Collaborative, and Faith in Action.

The story revolves around an African American high school student who, on the verge of graduation, is tased by campus police and later expelled. The film closes with a foreboding scene of the young man seemingly sliding into a life of crime.

According to the California Department of Education, the Kern High School District had a suspension rate of 12 percent for the 2014-2015 school year, compared to the state average of 3 percent. A lawsuit was filed in 2014 against the district for racial disparities in suspensions and expulsions, which overwhelmingly targeted black and Latino students.

“Some are saying that the school to prison pipeline begins with the first suspension,” said Vallejo City Unified School District Superintendent Ramona E. Bishop during a panel discussion after the screening, adding that first suspension can come as early as pre-school.

Vallejo is among a number of districts across the state that are working to reverse these figures, in part by putting in place practices known as Positive Behavioral and Intervention Services (PBIS).

PBIS goal is to reduce the amount of suspensions, expulsions, and other disciplinary actions by teaching students how to behave appropriately and giving them praise when they do.

Schools in Kern have also begun implementing PBIS. Arias, explained that one of the first steps is determining what the district expects in terms of student behavior, and then working with staff and faculty to ensure that behavior is modeled correctly.

“The goal is being very deliberate about what we teach in terms of behavior … something that we’ve gotten away from in schools,” said Arias, who added that schools should also learn to recognize and “celebrate when students do something right.”

According to Arias, recognizing a student for positive behavior can help to change negative tendencies.

Arias stressed that in addition to behavior schools also need to do a better job of tracking data around disciplinary actions, including the time, class and ethnicity of the student. Doing so will help staff and faculty better identify where problems are and work to resolve them.

Orozco said that in order for PBIS to be effective, there should be continued teacher training, professional development and partnerships with the families of students. He also noted that the issue is not unique to Kern, calling it a national crisis.

Bishop reminded those in the audience that the change they want to see in their schools begins with information and understanding if the issue, which was one of the main purposes for the screening.

Executive Director of the non-profit Faith in Action, Joey Williams stressed that parents and students need to be proactive in knowing the issue at hand and what their rights are.

“This isn’t stuff that’s just going to be handed into your mailbox, even if you have Internet access,” he said. “It’s something we have to be intentional about.”