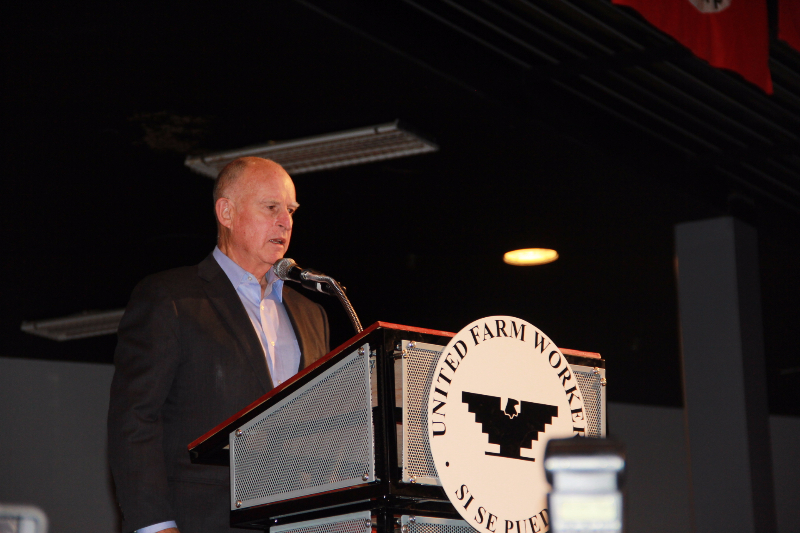 BAKERSFIELD, Calif. – “He wants Mexico to build a wall … and what I say is if Trump is elected – which he won’t be – I’ll build a wall to keep him out of California!”

The reference to the presumptive Republican presidential nominee by California Governor Jerry Brown was part of a speech he delivered last month to the 20th annual United Farm Workers (UFW) Constitutional Convention in Bakersfield.

During his speech the governor also touched on the issue of farmworker rights, which the UFW helped put on the political map with its founding back in 1962, creating the first-of-its kind farmworker union.

“The battle in California, the battle of farms, is a battle all across the U.S. to rebalance a system that has become completely unbalanced,” said Brown. “And this inequality will never be overcome unless organized labor has the power and the legal tools to make it happen.”

The UFW was founded by the late Cesar Chavez and veteran activist Dolores Huerta and is currently active in 10 states across the country. It has helped craft a series of laws protecting farmworkers, including AB 2757, which would have granted overtime pay to farmworkers who work more than 8 hours in day or seven days in a week. Currently farmworkers are the only group in the state not allowed overtime pay.

It was reported this week that the bill failed to pass out of assembly.

Still, Brown applauded California’s progress. He pointed to passage of SB4, which provides health care coverage to children who are undocumented in California, and AB60, which allows undocumented immigrants to get a driver’s license.

“Our heat regulations that protect workers from the scorching heat have been influenced and strengthened because of the United Farm Workers,” Brown declared. “In fact, the UFW had to sue me to get it done!”

As a UFW member, and someone who knows many who have worked in the fields, including my own family, I was inspired by Governor Brown’s words. Not simply because he is our governor, but because I believe he is genuine in his concern for farmworkers and the issues that undocumented people face every day here in California.

The crops raised by farmworkers here in Kern help to feed the rest of the nation and the world. There’s no denying just how important role they play in our economy. This is why we need to ensure that our workers are protected, given a fair wage, and not abused because of their immigration status.

To quote Brown, “Working Unions allow people to put their strength together in solidarity, and together they can make things happen.” I proudly stand with the UFW and organized labor all across the United States. I believe in the rights of undocumented workers, and will continue to advocate for justice.