Ahead of SCOTUS Ruling, Getting the Message Out to Central Valley Immigrants 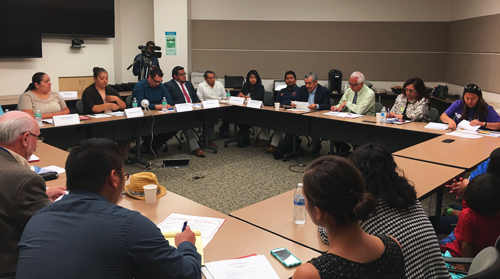 FRESNO, Calif. – Weeks before the U.S. Supreme Court is set to announce its decision in United States v. Texas, immigrant rights advocates are working to get accurate information to residents of one of the state’s hardest-to-serve regions: California’s Central Valley.

“We have one antidote to fear, and it’s information,” Sandy Close, executive director of New America Media, said during a recent media roundtable in Fresno. Fear and confusion, Close warned, could expose people to “being scammed, having people prey on the confusion.”

The meeting was organized by New America Media in collaboration with Ready California and local partner organizations, and was joined by reporters from a dozen media outlets, as well as community members and immigrant rights advocates.

Advocates said that with a decision expected soon, this is a crucial time to give people the information they need.

What families need to know

The U.S. Supreme Court will announce its decision in United States v. Texas between now and the end of June. The outcome will determine the future of two immigration relief programs on hold since Obama first announced them in 2014.

If the Supreme Court sides with the Obama administration, the programs would finally go into effect, providing certain undocumented immigrants with temporary protection from deportation and access to a work permit and a social security number.

One program would expand DACA (Deferred Action for Childhood Arrivals), eliminating the age cap now in place with the existing program that was first announced in 2012.

The other, called DAPA (Deferred Action for Parents of Americans), would create a new program for undocumented parents who have U.S.-citizen or legal permanent resident children.

“If and when these programs go into effect, Ready California is working with many groups to get ready,” said Sara Feldman, project director of Ready California, a statewide collaborative that is working to ensure the maximum number of eligible Californians benefit from DACA and DAPA.

Nationally, an estimated 5 million people could be eligible to apply for one of the programs.

Families can start getting their documents together, but they will not be able to apply until the programs go into effect. Advocates warn that the potential for immigration scams during this time could be high, and that families should not pay anyone who promises to get them on a “waiting list” for a program that isn’t available yet.

In the case of a negative decision or a 4-4 split, DAPA and expanded DACA would remain blocked. However, a 4-4 split would not set legal precedent and could not be used as a legal challenge to the current DACA program.

Advocates note that even if DAPA and expanded DACA remain blocked, there are a number of steps families can still take to protect themselves.

In California, undocumented immigrants can apply for a driver’s license under the state’s AB 60. Parents here can also enroll their children in Medi-Cal, regardless of the child’s immigration status. Nationally, eligible green card holders can apply for U.S. citizenship; and U.S. citizens can register to vote.

The original DACA program will continue to exist and is not affected by the Supreme Court case. Individuals can still apply for and renew DACA and check with a qualified legal service provider to see what other immigration relief options they might be eligible for.

Community members who have received DACA described the program as “life-changing.”

“I’m the first person in my family and possibly the first in my town, to graduate from high school,” said Yessenia Herrera, a native of Oaxaca, who is now pursuing a college degree and working as a medical and legal interpreter.

“Even though these benefits are temporary, the effect that they have on our lives are life-changing,” said Gelasio Rodriguez, who graduated from Fresno State University as a political science major. “You feel that now you finally belong.”

Service providers here have been crisscrossing five counties, spreading the word about how to apply for the current DACA program, avoid fraud, and prepare for the possible implementation of the two new programs.

But the region is one of the most challenging in the state to operate in, not only because the population is spread out but also because there are few legal service providers to serve them.

“There are only eight to 10 organizations covering 147,000 individuals who could qualify for DAPA,” said Hernandez. Some areas, like King and Tulare County, have few or no organizations able to serve them, she said.

As a result, immigrant families – some of whom have low income and education levels – may be more vulnerable to immigration scams.

For indigenous Mexican communities, such as Mixtec, Zapotec, Triqui and Purépecha, one of the biggest barriers is language. Some indigenous communities here speak only their native language and do not know Spanish or English, said Leoncio Vasquez Santos, executive director of the Centro Binacional para el Desarrollo Indígena Oaxaqueño.

How to avoid fraud

“A lot of our community has been taken advantage of by notarios or consultants,” added Mario Gonzalez, victim service program manager of Centro La Familia Advocacy Services.

Part of the problem is a translation issue, he explained. “In the United States, notarios don’t go through the same education as in Mexico or other counties. Here, they just take an exam. They can’t give you legal advice.”

Advocates encouraged immigrants to ask to see the credentials of their legal services provider. Applicants should never sign a blank form, and should ask for a translation if they need it. They should also make sure to get copies of any papers filed for their case.

“Don’t pay anyone who promises you a quick fix to your immigration problem,” said Gonzalez.

“A lot of people who have been scammed don’t report it,” he said. “If someone’s taken advantage of you, you can go to one of our local non-profits and they can help you report it to the FTC.”