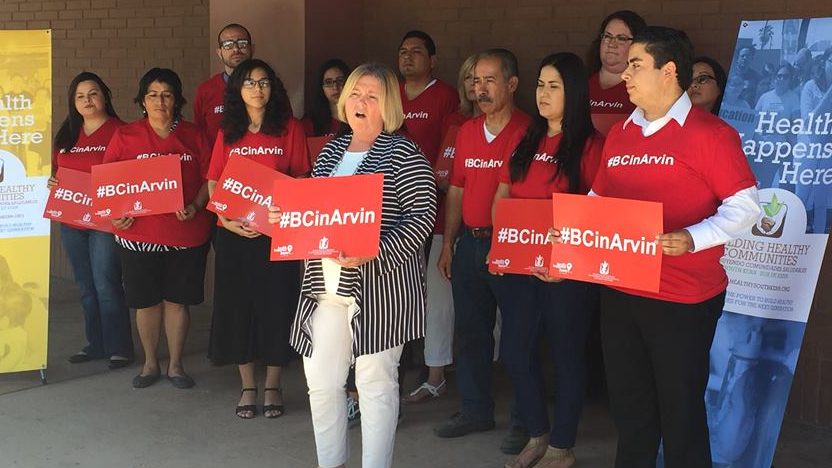 Members of the Arvin community gathered at the Kern Community College District’s Weill Institute where the community expressed their the need for a Bakersfield College facility to be on the KCCD final bond.

KCCD has included $25 million for a college facility in Arvin on their proposed bond. A press conference was held before a KCCD Board of Trustees meeting on June 9.

Jennifer Wood-Slayton, HUB Manager at BHC, said, “We are extremely excited and thankful that Bakersfield College has been a tremendous partner to us throughout this process. Now we really want them (KCCD) to solidify this commitment by putting this $25 million in the actual bond language.”

Building Healthy Communities South Kern(BHC-SK) has played an integral role in the pursuing of a college campus in Arvin.

Wood-Slayton said, “For the past five years, Building Healthy Communities has been working on trying to increase the presence of Bakersfield College in the city of Arvin. Our community members face unique challenges that are huge barriers to their success.”

According to BHC-SK, only 2.7 percent of people in the Arvin community that are 25 years or older have a bachelor’s degree or higher compared to 31 percent for all of California.

Arvin City Council member Jose Gurrola, BC alumni, mentioned that there are obstacles that residents of Arvin face in order to go to college.

“A lot of the rural communities in the valley are low income, and they have obstacles that are barriers for success in terms of education,” said Gurrola.

Current Arvin High School students and recent AHS alumni spoke of the obstacles in having to pursue higher education at Bakersfield College.

Transportation was the most talked about obstacle. Community members said that with their family members all working, it’s hard for them to make the trip to class at BC. Many of the residents do not have vehicles and ride the bus. The bus schedule conflicts with their class at times making it it harder for them to make it to class.

The poverty rate makes it hard for families and students to afford the transportation to BC.

According to BHC, the poverty rate in Arvin is 27.9 percent compared to California’s poverty rate of 16.4 percent.

“It is so important for the futures of our families, families who have made huge journeys, to be able to help their children have a better life, to have a pathway out of poverty, and we all know that pathway is education,” said Wood-Slayton.

A college facility in the city of Arvin allows the youth to physically see the opportunity of education as they grow.

Arvin High School senior Yesenia Aguilar, 17, said, “Having a BC campus near Arvin or at Arvin will help the students visualize themselves attending college.”

The board recognized the growth in attendance of Arvin/Lamont students.

KCCD Chancellor Sandra Serrano read off attendance numbers for Arvin/Lamont residents. She read off a report that they received in October of 2015 for the 2014-15 school year. Serrano said the total attendance for Arvin/Lamont residents at BC was 995. She mentioned there were 33 at Cerro Coso, seven at Porterville, and 20 participating in the WESTEC Center. The board said that the numbers have doubled since 2010.

The numbers show the mentality of the community of South Kern is becoming more college oriented.

Arvin Union School District Superintendent Michelle McLean explained that her district puts a lot of effort into creating a college-going culture. She explained that the district has classes dedicated to preparing students for college, and they give out college scholarships for graduating eighth graders.

McLean explained that a college facility in Arvin will allow the students who are already becoming part of a college-going culture to have greater access to college.