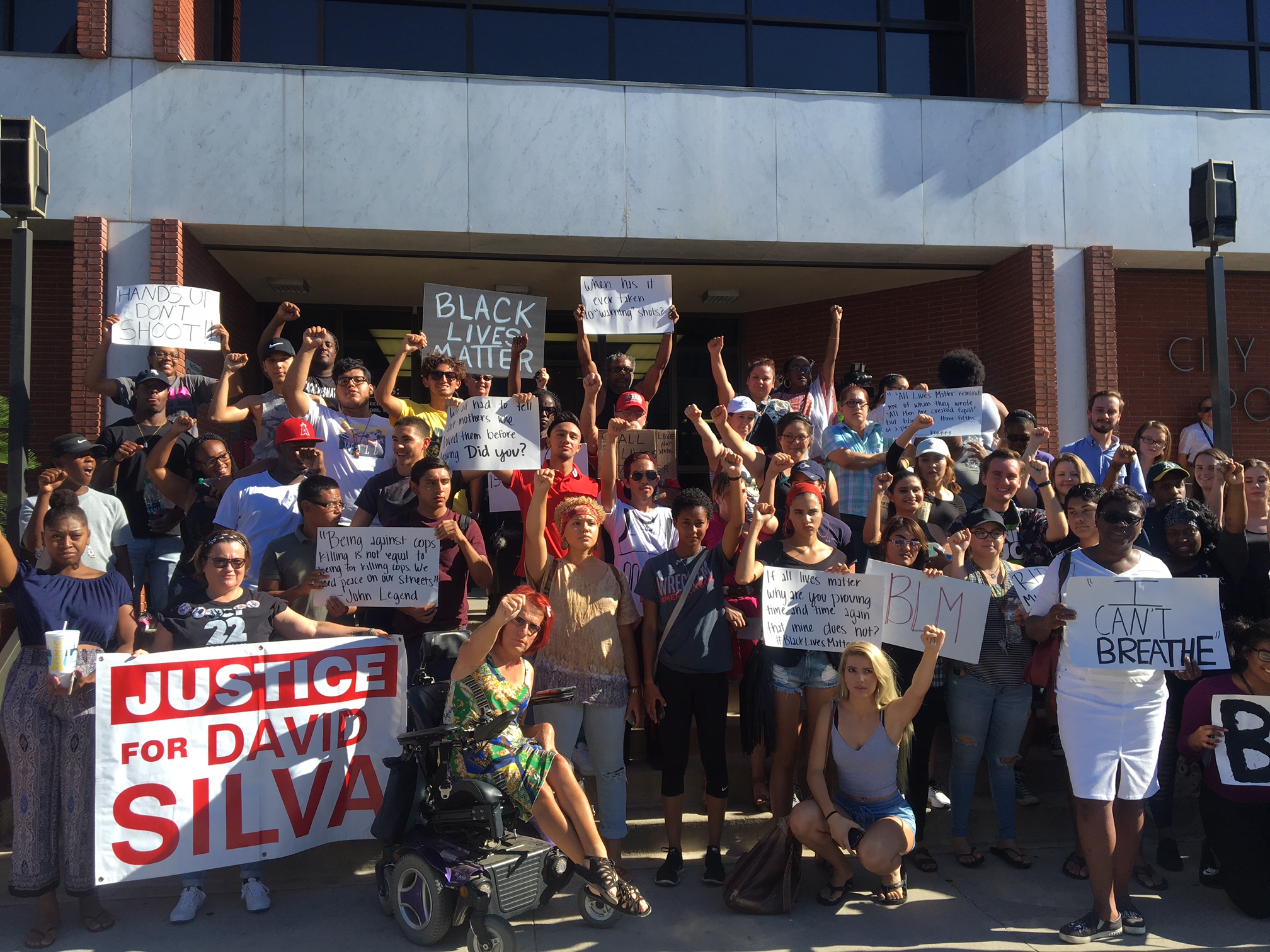 BAKERSFIELD, Calif.,– An unlikely duo are responsible for organizing the first Black Lives Matter rally in Bakersfield. Nathallie Hughes, 17, and Maria Flores, 18, a current and former Golden Valley High School students, led the march through the streets of downtown to the steps of Bakersfield Police Department.

After two recent police involved shootings and the gunning down five police officers in Dallas, Texas, the Black Lives Matter movement has once again gathered national attention. This time however, the movement has been brought home to the streets of Bakersfield.

“We were inspired by the Black Lives Matter movement and their ability to bring people together to actively fight for change,” explains Hughes. “After seeing that Kern County is the worst in the nation in terms of police killings, I was motivated to start the change here at home.”

Local supporters of Black Lives Matter, like Ashlie Saucedo, 17, were pleased to see the movement come to Bakersfield.

On the day of the event, dozens of people of every race, gender, and age gathered under the shade of the front entrance of the historic Fox Theater trying to keep away from the summer heat while waiting for the march to begin.  When Hughes and Flores arrived, they were met with applause for their organizing efforts.

After requesting that all protesters remain peaceful at all times, the young organizers led the march, hand-in-hand, down 21st Street and through downtown Bakersfield.

Those marching waved signs and chanted “Black Lives Matter!” and “Hands Up, Don’t Shoot!”, in solidarity with nationwide protests.

As the crowd walked people came out of their homes and businesses to see what all the commotion was all about.  The march grew larger, overflowing off the sidewalks and into the streets as bystanders joined in on the demonstration. When the march came to an end at the Bakersfield Police Department, the group had swelled to 100 people.

After a moment of silence for the 5 police officers killed in Dallas, Hughes broke the silence.

“Black Lives Matter is not anti-police, we are anti-police brutality. People who are involved in our movement and consider themselves to be ‘anti-police’ are people who have lost faith and are no longer a part of this peaceful movement.”

The crowd listened silently as these two young women spoke about the importance of ending police brutality and racism and how to bring about change both here in Bakersfield and across the country.

“First and foremost, we need a dialogue. Dialogue between police and civilians to be able to restore trust in the community and dialogue with our local leaders on how to celebrate black culture and not destroy it” said Hughes.

As people drove by in their cars yelling hurtful words, the crowd would chant louder, in an attempt to block out the critics.

Flores believes that it’s important that she as a latina supports the cause of Black Lives Matter.

As the peaceful protest came to an end, Hughes and Flores were proud of the turnout and event, and especially of the people of Bakersfield who marched.

“We don’t just need black people. We need Latinos, we need Asians, we need white people, we need everyone to come together to show black lives do matter. We want equality for every single race” said the Flores.