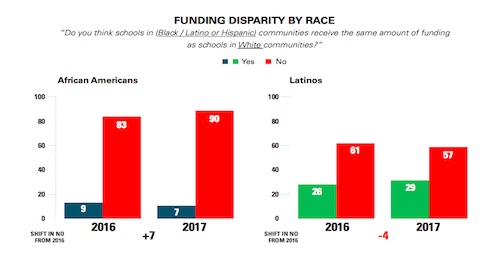 African American and Latino parents see a lack of funding as the biggest cause of racial disparities in education, according to a newly released poll by the Leadership Conference on Civil and Human Rights (LCCHR).

While the poll’s findings are not new, they also speak to the high aspirations that black and Latino parents have for their children.

The poll, which was commissioned by The Leadership Conference Education Fund (LCEF), is significant as states have been preparing their education plans to comply with the Every Student Succeeds ACT (ESSA), the successor to the No Child Left Behind Act. Developed through extensive bipartisan efforts during the Obama administration and passed in 2015, ESSA allows states greater flexibility to tailor education delivery strategies to fit their populations’ unique needs.

Wade Henderson, the president and CEO of the LCCHR and LCEF, concedes that “much of what the poll reveals really isn’t a surprise for us.”

However, Henderson says the poll also reveals the attitudes and aspirations of the parents of black and Latino children, as well as how these parents measure success. Importantly, he notes, these are the parents of the children who, when combined, make up the majority of students in America’s public schools.

For Liz King, LCEF’s director of education policy, the poll’s findings are relevant given that under ESSA provisions, states must report on how education money is spent, and on whom, in compliance with federal regulations.

Matt Hogan, a partner with Anzalone Liszt Grove Research, which conducted the poll for LCEF, said very few of the parents polled were familiar with ESSA. But he notes that there’s been an increase since last year in the number of black and Latino parents who believe that racism in the education system is affecting their children negatively.

The poll also found that black and Latino parents whose children’s teachers are predominantly white are more likely to believe that their schools are “not really trying” to educate students of color.

Henderson says that achieving equity in education is still an unrealized goal, despite the recent celebration of the 63rd anniversary of the Brown v. the Board of Education Supreme Court decision that desegregated America’s schools.

ESSA is imperfect in Henderson’s view because in giving individual states more control over education, existing discriminatory patterns against black and Latino students could become amplified. Yet, Henderson believes that ESSA offers an opportunity for parents and activists “to organize themselves to have real impact on how the local school system addresses the overall federal obligation to educate every student with meaningful equal educational opportunity.”

While emphasizing the need for coalition building to achieve goals in education, Henderson said the poll’s findings will inform the demand for better policies and more equitable allocation of resources.

“We are not going to accept inferior education as the result of changes in the law,” he says. “It doesn’t matter, quite frankly, whether it’s Betsy DeVos in the Secretary of Education’s position, or someone else. The standard of accountability for federal involvement remains the same and we expect this administration to live up to its obligations.”