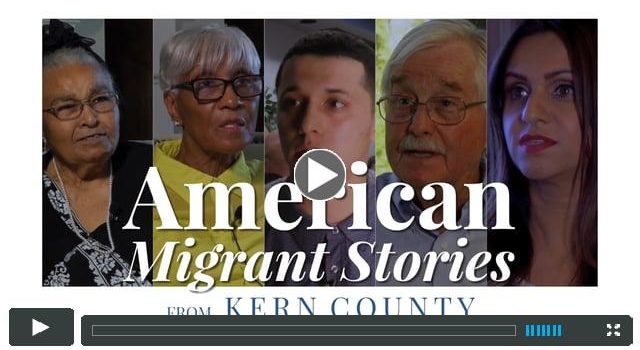 Daisy Tafoya was a victim of cartel violence.

The 20-year-old Mexican national had been drugged, threatened, and held captive after witnessing a murder, her family members said. She had seen the assailants faces. She knew their names. She did the only thing she could think of to save herself: she fled to America.

She was safe in the United States, checking in regularly with ICE agents until an executive order carried out by President Donald Trump gave immigration officials sweeping authority to carry out deportations as they saw fit.

During her next check-in, she was detained and deported, and now nobody knows where she is. Her family fears for the worst.

Tafoya’s story was just one of those told last month at a screening of “American Migrant Stories,” a documentary highlighting the pain that immigrant families endure while seeking better lives. It was produced by Cal State Bakersfield’s Center for Social Justice and the Immigration Justice Collaborative, a group of local attorneys who banded together last year in response to uncertain immigration policies Trump enacted.

“This was not your everyday deportation. This woman was on the run because she was a witness to murder and needed to be here in order to stay safe,” said Win Eaton, a local attorney and member of the Immigration Justice Collaborative.

“It was very powerful. The personal testimonials of people who are experiencing the political climate in real ways is really helpful and it was very compelling. It should awaken all of us and remind us that we need to work toward justice for everyone,” Ward 2 Bakersfield City Councilman Andrae Gonzales said after the screening.

This documentary reinforced that community members need to rally together for immigrant rights, and finding a solution to the Deferred Action for Childhood Arrivals Act, which provides undocumented people brought to this country as minors protection from deportation.  In the midst of trying to keep these policies in place, students at local high schools have been conducting walkouts and marching through Bakersfield protesting.

This was a great start, but what else can we do? Gonzales said it comes down to civic participation.

Gonzales and many other community leaders agree that teenagers can do our part everyday by focusing on getting our education. We have to become educated  and focus on our futures so that, as adults, we can work to create change. Teenagers can also do our part to improve conditions for immigrants by starting the conversation and coming together to find more efficient ways for our generation to make change while at school and in our free time.

The documentary also pointed out how much immigrants benefit the agricultural industry. The majority of workers in the fields are immigrants who put in long hours of hard work and barely see their families as they try to put food on the table. . Unfortunately, the benefits of a healthy immigration system aren’t brought up often enough during debates. . The conversations skew  negative, and as a result, those ignorant of the subject are sometimes prone to get a slanted view of immigrants.

This has struck fear among many children —  the fear that one day they may go home and be told their mother or father has been deported.

Sadly, with political rhetoric what it’s become, many people, including children, are feeling emboldened  to openly belittle  immigrant families and it could be because in many cases, kids don’t know any better. They don’t know how hard the lives are of those immigrant families. All they know are the stereotypes.

In order to stop these things, the schools should  start showing “American Migrant Stories” in history, civics, or English classes to give students a better understanding of how undocumented immigrants really live.

As of right now, unless they’re a part of these families or close to someone who is, Kern County students don’t really know the real struggles.