Perspective: Out of tragedy, our students gained a voice in the gun control movement

A month ago, students were dashing through halls and classrooms, running for their lives. There was screaming, chaos and uncertainty.

On Wednesday, one month after a former student walked into Marjory Stoneman Douglas High School in Parkland, Fla., armed with a rifle and killed 17 people, students across the country confronted the tragedy with resolve.

We rallied, gathered, and prayed together to draw attention to school safety. Nationally, students gathered in gyms on campus, in quads, and walked through the school gates and into the street to stand in solidarity with those affected by the violence in Florida.

It was no exception in Delano at Robert F. Kennedy High School.

We were on a late-start schedule, and were to start classes at 10 a.m. Instead, nearly all 900 students walked to the gym for a rally to draw attention to the need for greater gun control, and to shine a light on the issues created by bullying. At the end, there was a balloon release for those who lost their lives. It felt like a cross between a political rally and pep rally. 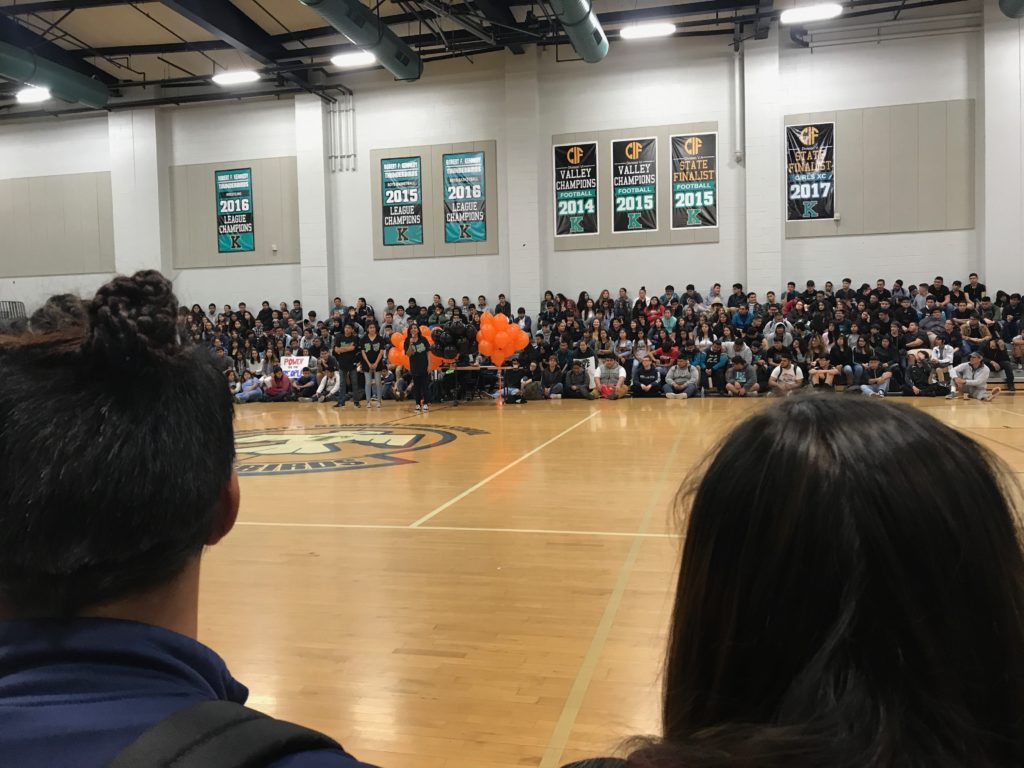 Scores of students wore orange to support the gun control movement, or black to mourn the lives lost in the shooting.

“We wanted our peers to get involved in the politics and get a glimpse of what we need to do in times like this,” said Luis Villa, a senior at Robert F. Kennedy High who worked with administrators to organize the event. “This is how we were all able to come together as a whole school to get involved and really use our voices.”

I was there because gun control is a necessary step in order to ensure all schools across the country are safe places for all. Without gun control, many more lives will be taken for unnecessary reasons. A gun can be in anyone’s hands. No one should have access to guns that can potentially take the lives from innocent people.

The greatest movements start with one person and a purpose.

Villa kicked off the rally with these three questions:

“Who has been bullied?”

“Who has ever seen someone get bullied?”

“Who has bullied a person?”

Most students raised their hands.

“We have all grown up together in this small town of Delano, so, why do we all feel the need to put each other down and judge each other from the front?” Villa asked. “We must look at things in a different perspective. We are all much more similar than we think.”

“Bullying is where it starts, if you really take a step back and take a good glance at the situation, you’d quickly be able to analyze that the shooter’s actions led him to the outcome,” Reyes said. “It all started with judgement and the very hostile environment at school.”

All students have been through some difficult situations — some worse than others, and each of us have different backgrounds, she said. None of that is a reason to pick on anybody else, she said.

Tragic as it was, the shooting was uniting everyone as a school and making us aware of issues we don’t always think about, Reyes said. She and other students said they felt they had gained a voice.

As I was standing there, moved by the participation of other students, I took a glimpse over my shoulder and quickly took notice that our administrators and teachers were present.

I was heartened that they were being supportive of their students and allowing us to take part in the nation-wide walk out. It was heartwarming knowing that none of our students were being disciplined for being proud and loud for what we believe.

Moving as a whole in perfect harmony is the most beautiful thing a community can have, and when you have a whole school coming together as one, it becomes much more than just a gathering. We became a union and there is no greater power than the power that comes from being united.

We stand strong as a school, as a family, and as an alliance against gun control. This is only the beginning. We are taking baby steps to get to our ultimate goal, which is the safety, equality, and happiness of all.