Rumors of an expansion began circulating in July when GEO Group Inc., a Florida-based private operator of detention, corrections and mental health facilities, purchased the Bakersfield Dome, which sits next to the facility.

The former owner of The Dome told The Bakersfield Californian in July the building would be demolished to allow for expansion of the detention center. However, Mesa Verde officials denied any plans of expanding.

Although the rumors have yet to be confirmed, those at the event wanted to voice their concerns with the hopes to stop any possible expansion of the detention facility.

“Making an expansion, is not the way to go,” said Tania Bernal, a member of California Immigrant Youth Justice Alliance. “The more they expand, the more people they will detain.”

At the event, attendees heard stories from formerly incarcerated asylum seekers and undocumented people who have passed through the facility. Other speakers included members of Kern Welcoming and Extending Solidarity to Immigrants and immigration lawyers. 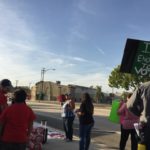 Sandy Valenciano, one of the speakers at the event, told the crowd why she was supporting the event.

“I’m here because I’m undocumented, and everyone is impacted by this expansion,” Valenciano said. “We want to bring attention because not a lot of people don’t know that the detention facility is here. We want to stop the expansion.”

Valenciano has been working with others to prevent the possible expansion by writing letters to the Bakersfield City Council.

“We are trying to do everything possible to prevent the expansion of the facility,” she said.

Other speakers talked about the environment of the facility. They said it resembles prisons, surrounded by high wired fences and security cameras.

“They are being locked in cages like animals,” said Julie Otero, another speaker at the event. “People in America treat dogs better than these prisoners and children are treated.”

California Immigrant Youth Justice Alliance (CIYJA), along with other organizations, hosted the event to fight for immigrant rights and justice.

This event was part of the 2018 One Book Project. This year’s project dives into prison systems across the world. It explores the human stories of incarcerated men and women and those who imprisoned them. It focuses on themes of incarceration, the effects on families and the community, the humanizing of prisoners and rehabilitation.