May 23 from 6-7 p.m. in the Board Room, 5801 Sundale Avenue with live broadcast/video conference at Arvin High, Kern Valley High and Shafter High schools

If you are not able to attend these sessions but want to be involved, contact Brandi Ball, Supervising Administrator at 827-3100 to arrange a time to come in or use phone/email. “We want to hear from all community partners and stakeholders,” the district said on its website.

For the first three years of high school, Chyna Patz didn’t feel safe at school. She was bullied for the way she looked, the way she dressed and her sexual orientation.

Patz identifies as a Lesbian, Gay, Bisexual, Transgender and Questioning student. She said because she identifies as LGBTQ, she was verbally and physically harassed by classmates she didn’t know, making it difficult to identify bullies to the administration.

There were times when she was shoved to the ground and kicked by classmates.

“We never found them,” she said. “I felt unsafe every day. I was terrified.”

But the physical harassment was just a small part of the problem. Students at West High verbally attacked Patz on a regular basis.

“People would tell me, ‘Go kill yourself,’” Patz said.

“I was asking my mom to get me out of school all three of my years at West,” Patz said.

Before she started her senior year, Patz transferred to a non-traditional high school. 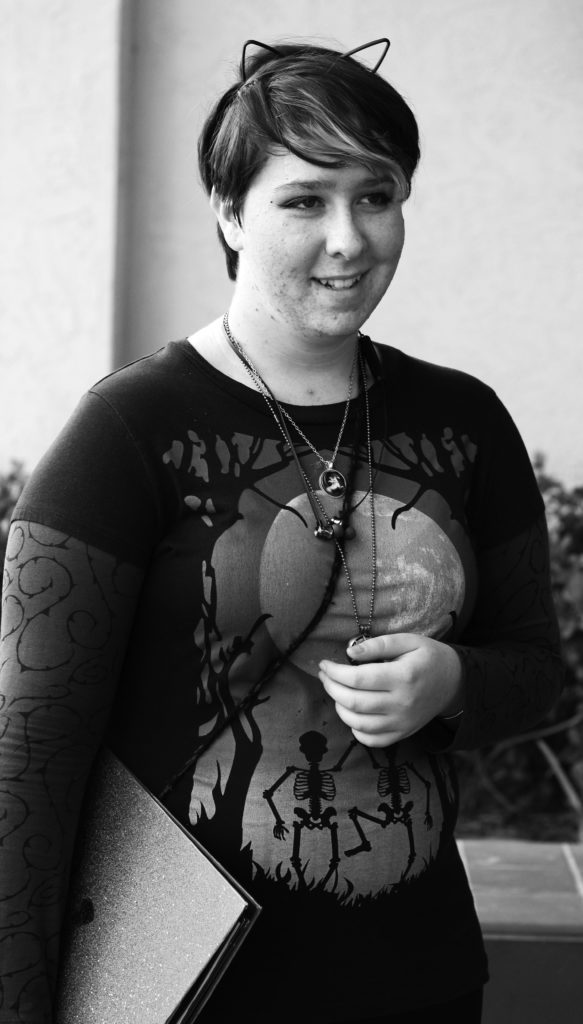 Chyna Patz, a senior, poses for a photo at her new school.
BY LIZETTE CHAVEZ

Patz’s transfer is part of a larger trend in Kern County. The percentage of students who identify as LGBTQ and attend a non-traditional high school in Kern County is “significantly” high, according to Gloria Garcia, a LGBTQ Community Worker for California Rural Legal Assistance.

The percentage of students who identify as lesbian, gay or bisexual at non-traditional high schools is 15 percent, according to the California Healthy Kids Survey.

Reasons for the high number are related to feeling safe and included in school, said Lisa Cisneros, who works for CRLA’s LGBTQ program in the Selenas office.

“We rely on feedback from students that help inform us as to their needs related to support and information,” she said.

But students have told Cisneros and Garcia that the curriculum is not LGBTQ friendly within KHSD.

“Thats one way LGBTQ students feel invible,” said Cisneros. “Nobody gives them information through their (school) lessons that is relatable to them.”

“We can’t diagnose the precise cause of it by looking at data, but we know given the variety of factors students stay in school, there are a lot of improvements that could be made to change that pattern and reverse the trend,” Cisneros said.

Patz didn’t feel included at her school. Instead, she felt isolated for who she is.

Patz, the former president of the Gay Straight Alliance Club at West High, said she believes she was a target for bullies because of her sexuality. She is open about her sexuality, she said.

Because of her transparency with her classmates, they continued to bully Patz, resulting in her transfer.

HOW TO HELP REVERSE THE TREND

There are a number of ways schools and the district can be more inclusive when it comes to students who identify as LGBTQ, such as having an inclusive curriculum, including sex education and history classes that are LGBTQ friendly; having supportive counselors and teachers; and celebrating LGBTQ remembrance days, Garcia said.

To ensure students who identify as LGBTQ receive the proper resources, Garcia and Cisneros are advocating for LGBTQ-specific resources in the district’s Local Control Accountability Plan.

The LCAP, a component of the Local Control Funding Formula, determines how the district intends to spend funds and describes the goals, actions, services and expenditures to support positive student outcomes that address state and local priorities. The public is invited to share input on what they believe should be included in the LCAP report; however, the board must approve the suggestions and the final report.

CRLA has advocated in the past for LGBTQ-specific activities and reforms to be included in the LCAP to help make the school environment more inclusive for students, but the KHSD board has yet to adopt one of those recommendations, according to Cisneros.

The district is holding public forums now and is accepting input from community members. The next public forum is at 5:30 p.m. on Monday at Bakersfield High.

“We are also meeting/engaging with parent advisory groups, student advisory council(s), outside community partners/groups, faculty associations and employee groups,” the district said on its website. “The Kern High School District is dedicated to maximizing student success.”

Because of her experiences, Patz became an anti-bullying advocate. She helped organize an anti-bullying assembly, with help from the Bakersfield Police Department, at West High to address the widespread bullying of LGBTQ students.