Lyndsi Andreas was prepared to speak at the Bakersfield City School District board meeting Tuesday. One of the topics at hand? A district attempt to limit the amount of time speakers could have to address the board during the public comment period.

Except there was one problem — she couldn’t get into the board chambers. The room was at capacity.

After the meeting began — speaker slip in hand — she shoved her way through a crowd of teachers and community members chanting, “open the doors,” who were outside the board chambers. Like scores of others, she was too late.

“A number of people were prevented from submitting (public comment) forms because the doors were closed,” said Andreas, an attorney with Greater Bakersfield Legal Assistance and member of Kern Education Justice Collaborative, a coalition of community groups organized to advocate for educational equity.

For many speakers, it smacked of irony: community members wanting to comment on the district’s attempt to limit their public comment time could not even make it into the building to hear the public meeting.

Hundreds of community members and teachers couldn’t fit inside the board chambers and were not allowed in. Instead, they sat on chairs in the lobby of the district office on Baker Street, while hundreds more overflowed out of the building and into the sidewalk.

There was no effort to relocate the meeting to an auditorium inside the building to accommodate the crowd, something the district has historically done.

The chaotic scene unfolded as hundreds of teachers, parents, community members and students came to voice their frustrations with leadership decisions at Bakersfield City School District. They complained about stalled salary negotiations with teachers, a recent announcement that summer school would be cancelled for 2019 over budget woes, and a vote made that evening to limit the time for public speakers from five minutes to three minutes.

Community advocates and teachers argue the district has mismanaged funds that could be used for teacher pay and summer school programming. District officials say their hands are tied by stagnant state funding and increasing costs. 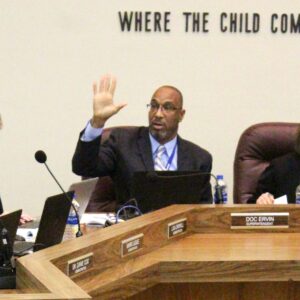 That reasoning, however, did not discourage speakers from lambasting board members and district Superintendent Harry ‘Doc’ Ervin for more than an hour Tuesday.

Comstock told the board a 2 percent raise on the table was an insult.

“We deserve pay equity,” he said. “This board needs to ask themselves, ‘Why are so many teachers leaving?’ Noncompetitive pay? Poor working conditions? A lack of safety? A crisis of integrity and distrust in leadership? Yes — yes to every issue I just named and it all started with lack of trust and integrity at top — the superintendent and the board.”

DHF presented the district a petition with almost 800 signatures urging it to reinstate the program. Funds allocated to the summer school program represent less than 1 percent of the district’s $420 million budget, Chavez said.

“How can the Bakersfield City School District remove a program that it had already allocated [Local Control Accountability Plan] funds for,” asked Cecilia Castro, DHF’s education policy director, referring to a blueprint districts are tasked with creating with community input for how it spends state funding.

Although the district made the decision to cut the program before notifying parents and holding a community forum, BCSD is revising the Local Control Accountability Plan legally, according to Kern County Superintendent of Schools Assistant Superintendent of Instructional Services Lisa Gilbert.

The California Department of Education confirmed Gilbert was correct.

“The LCAP process is designed to have changes occur,” Gilbert said. “Your process for addressing proposed changes is aligned with the education code requirements. They have sought input form stakeholders and parent advisory groups.”

“By limiting the time to three minutes, you are discouraging the public from exercising their First Amendment right and participating in this process,” said Washington Middle School teacher Carla Jeffers.

Such a move is standard across many public agencies across Kern County and beyond. Kern High School District gives members of the public three minutes to speak at board meetings, and the Kern County Board of Supervisors allots two minutes per speaker during the public comment period.

“No one is trying to use the policy to limit your First Amendment rights,” Wu said. “It ensures efficient board meetings and allows as many speakers as possible.”

The board is also allowed to revoke speaking rights from individuals or organizations for disruptive or threatening behavior. The new policy also prohibits speakers from giving their time to another speaker.

“In all the years I’ve been attended meetings, only one time have I ever seen a speaker removed,” said board member Pam Baugher, who has been attending meetings for more than 20 years.

The board members said they appreciated the comments and input from the speakers.

“I want to thank the speakers,” said board President Lillian Tafoya. “One thing I learned is feelings are neither wrong or right. It’s was just one of those nights we can all remember and reflect and go forward.”

“We are a district that supports our students and our parents,” Tafoya continued. “For those who don’t feel that way, we hope you reach out to us and help you understand and learn what you have to say.”