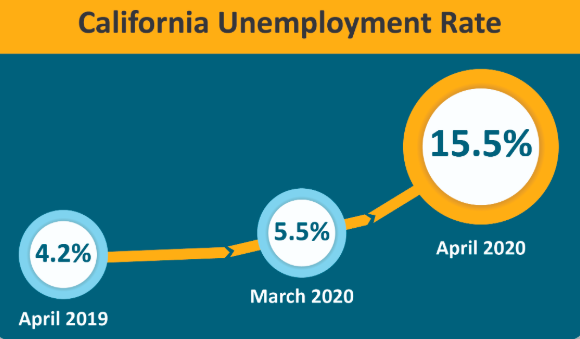 Ralene Oros was told in March her job as a cashier at a yogurt shop would only temporarily be cut during the pandemic, but three and a half months later, she remains jobless and unsure when she will have a steady income again.

Because she has not heard from her boss, Oros has taken matters into her own hands and is trying to find another job in the meantime. Unfortunately, she hasn’t received a single call or email back.

Oros, a student at Bakersfield College, is one of thousands of people across the nation who have lost their job as a result of the COVID-19 pandemic. Nationally, the unemployment rate was at 13.3 percent in May, according to the U.S. Bureau of Labor Statistics, which was a major jump from the unemployment rate reported in February 2020, which was just under 4 percent.

“The unprecedented job losses are like nothing before seen in California history in a current data series that dates back to 1976, and are a direct result of the impacts of the COVID-19 pandemic,” EDD said in a news release.

The previous record high rate was at 12.3 percent at the height of the Great Recession, according to the EDD. The number of unemployed Californians rose to almost 2.9 million over just two months, surpassing the previous 2.2 million peak during the recession that took more than two years to reach.

“The economy is not good,” Kern County’s Chief Administrative Officer Ryan Alsop said during a press conference on June 11. “Unemployment is not good. It is very high in this county. We have had many folks lose their jobs and many folks applied for unemployment benefits.”

As if finding a job during the pandemic wasn’t hard enough, young people say they are having an even tougher time. As young adults that are new to entering the workforce, many may not have any experience, while older adults are more likely to have those wanted skills and qualifications that employers are looking for. This is appealing to employers as they can be easier and faster to train which is convenient as businesses begin to reopen.

“I don’t think we have enough job options for our age because most jobs want at least one plus years of customer service experience when most of us have little to none,” said Oros.

Right now, many young adults are trying to help their families play bills and support themselves through school.

Ericka De La Cruz, an incoming first-generation freshman at Bakersfield College, was eager to get a summer job to save up for college, but due to the pandemic, she has made little progress. When asked how COVID-19 affected her job search she responded that it had definitely limited her options of places to apply.

“Many stores are holding off on hiring,” she said. “Many local stores or fast food chains are more likely to hire people that are full-time. As a student, I can only work part-time.”

De La Cruz has applied to four different positions, but hasn’t heard back from any employers.

The unemployment trend threatens the livelihood of the residents of Bakersfield, and its growing youth as they enter the workforce. The future that awaits young adults looking for jobs can be very discouraging. However, officials hope with businesses starting to reopen, more jobs will become available.

Alsop said at the June 11 press conference, “If you want to talk about how businesses are reopening, businesses are expanding operations and getting back to having customers in, and that is an improvement, and we will see the benefit of that over time.”