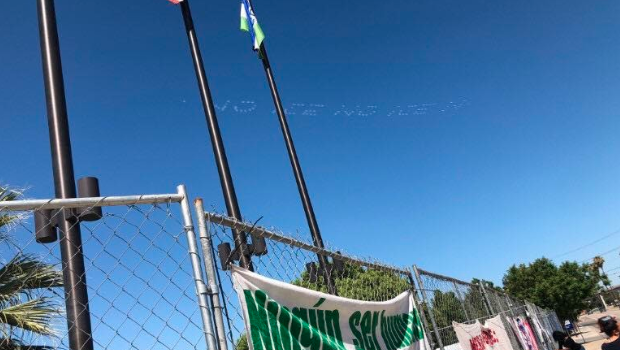 As part of the nationwide “In Plain Sight” activist artwork protest, skywriting fleets left artist-created messages in the skies above Southern California detention centers, immigration courts, and other landmarks over the Fourth of July weekend.

In Kern, plans left a message in the sky that read, “No ICE, No ICE, No ICE.” This was a call to abolish the U.S. Immigration and Customs Enforcement.

Furthermore, community organizations such as CYIJA and Kern Youth abolitionists, BLM Bako, BC Latinos Unidos Por Educacion and BC Umoja, also united to the cause and held a car action demonstration in front of Mesa Verde Detention Center in Bakersfield on Friday at 10 a.m.,  protesting immigrant detention centers and mass incarceration, while supporting the mens  hunger strike inside Mesa Verde.

As the demonstration began, GEO workers were trying to cut inmates yard time, because of the protesters outside, according to community organizer Tania Bernal.  The immigrants detainees did a sit-in refusing  to go inside. They heard the Mariachi music outside, which, “brought them to tears knowing that the community is outside supporting them and fighting side by side with them for their release,” said Bernal.

“We stand in solidarity with the San Quentin hunger strikers, and anyone else in any other facility participating in a hunger strike,” wrote Asif Qazi, who is detained at Mesa Verde,  in a letter. “We demand that they also be released, and in the meantime, that the conditions there improve.”

A 2016 report by the Black Alliance for Just Immigration found while Black immigrants make up only 7.2 percent of the non-citizen population in the U.S., they make up 20.3 percent of immigrants facing deportation.