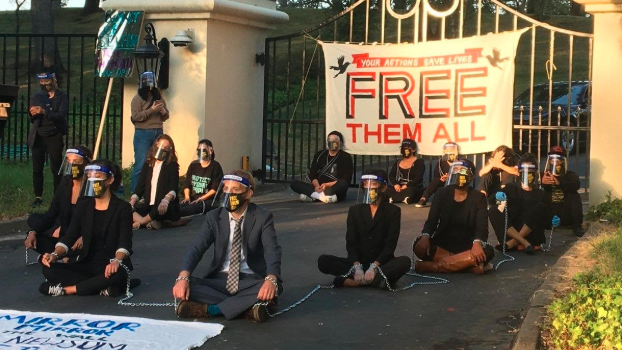 The California Liberation Collective led a protest Monday in Sacramento outside of Governor Gavin Newsom’s home to demand mass clemency and emergency release for people in state prison and ICE detention facilities.

The protesters also demanded the Governor stop transfers to ICE and between prisons, stop the expansion of immigration detention, and hold the detention industry accountable for outbreaks of the COVID-19 in facilities.

At the demonstration, a group of 14 people chained themselves to the mansion’s gates. The group included several community organizers who are undocumented, as well as immigration attorneys. They were arrested at the action and released early Tuesday morning.

“The call to free them all is led by Black and Brown detainees who have been staging hunger and labor strikers to protest the fact that they are being held without access to soap, sanitizer, or PPE,” said attorney Juliana. “They have been retaliated against by guards, including pepper sprayed, for taking peaceful actions to save their own lives.”

Brisa Cruz, one of the 14 demonstrators that got arrested, is an undocumented indigenous organizer with California Immigrant Youth Justice Alliance(CIYJA).

“I took part of this action because enough is enough when it comes to Governor Newsom not taking action in freeing our community members inside prisons and immigrant detention centers during a pandemic,” said Cruz. “This isn’t a political issue, it is a public health issue, and he showed us he doesn’t care.”

As an undocumented person, she said she put herself in the shoes of those community members who are and have been in detention for years.

“It meant putting my body on the line to demand justice, to demand liberation and to call out Newsom on his inability to listen to community members inside these prisons that are literally dying from COVID-19,” said Cruz.

Cruz said when she was arrested, she thought about community members who are in prisons and the hunger strikes taking place in Mesa Verde.

“Being inside an isolation cell allowed me to see and taste just a little bit of what our loved ones have been going through for years,” Cruz said. “It reiterated what we already knew. Prisons and police shouldn’t exist. I felt violated. I felt gross. I felt humiliated, and emotionally, I broke down out of anger and infuriation.”

A number of other Kern County residents participated in the demonstration

“I participated in the protest because it was a call to action for me,” said Javier, an East Bakersfield High student. “I want to create change and bring awareness about the inhuman and dehumanizing conditions the inmates in ICE detention centers and Private Prisons are facing.”

Javier said this is personal for him because he fears his mother could be placed in an ICE detention facility.

“It would crush me because I am young and I depend on her,,” Javier said. “I took away that the people are stronger than their oppressors.  I hope that governor Newsom listens to the people and releases them. I hope these private detention centers are dismantled.”

Valeria a former 2020 graduate from CSUB and an activist with Kern Youth Abolitionist works closely with folks who are detained inside Mesa Verde and Adelanto ICE detention centers.

As an undocumented youth, she fears she will be susceptible to the same type of treatment if she was to be detained by ICE.

“To be in solidarity with the folks who are being directly impacted inside of detention and prisons where folks who have been holding strikes since April of 2020 are being exposed to inhumane and unfair treatment during this global pandemic,” said Valeria. “What I took away from this demonstration is that when the community comes together collectively and organized with folks inside and outside that there is no stopping us from delivering an impactful message not only to the governor but to the world.”

Veleria hopes to abolish this systems and that the governor frees all individuals inside of these for profit prisons and detention centers.