Eastside overpass transformed into inspiring message for youth in community 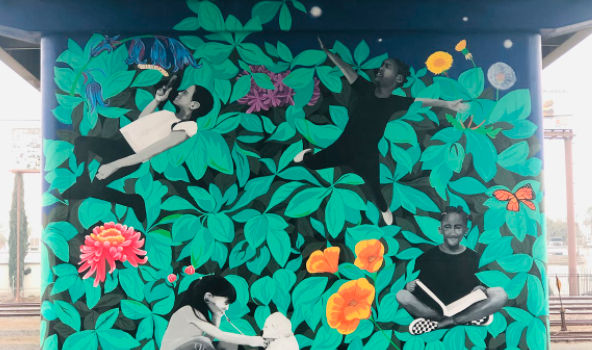 One Eastside Bakersfield overpass is getting a makeover, with a mission to inspire young girls and women in the community to strive for excellence and achieve their goals.

Depicting actual girls who live in East Bakersfield, the mural aims to communicate that all girls have the potential to be whatever they want to be in life, and, like a flower in the Spring, they can “bloom.”

“When you bring art to places like this, it shows people that someone is thinking of them,” said Williams-Cordova. “It transforms the space by adding culture, identity and humanizes an otherwise stark environment.”

Located underneath the Beale Street overpass, between Kentucky and Jackson streets, “Bloom” takes on an almost three-dimensional feel by painting the support beams that radiate out from the central panel and support beams framing the focal point. The framed composition is a group of girls of color successfully experiencing life surrounded by vegetation and beams of color representing the sun at various parts of the day- from sunrise, to midday, to sunset.

Gonzalez said this location has been on his mind for quite some time, and envisioned beautifying it one day.

“I wanted to do something there in terms of a mural, and it was obvious to me that it was a canvas waiting for a mural,” Gonzalez said.

Bloom aims to affirm all girls’ self-worth, that they can grow up to become as smart, valuable, successful, powerful, beautiful and important as anyone else in the world.

Many residents feel this overpass was a forgotten space in an underserved neighborhood; however, that is beginning to change.

“I truly believe that public art improves the quality of life for the people who view it,” said Williams-Cordova.

Williams-Cordova’s grandparents lived in the neighborhood until they passed away a few years ago; however, it remains a familiar comfortable place for her with lots of fond memories from her childhood.

“I want to see it thrive, and I know as a little girl, this is exactly the kind of thing that would have captivated my imagination as we passed through the neighborhood,” Williams-Cordova said.

Thompson said the mural also provides positivity for the community members, which is a nice shift if what some may be used to.

“As you’re traveling along in town, you see billboards of  deterred message, up and down Union Avenue,” said Thompson, who grew up in East Bakersfield. “You may see messages that talk about human trafficking, sex trafficking and prostitution. So rather than send the message of all these negative things that we know are going on in our communities, why not just write on the walls and the pillars that we drive by, but the message of a little girl reading a book or being a veterinarian?”

“To me, that means that a little boy or little girl walking, can see themselves reading that book or getting that college degree, or just being happy.”

Karen Cid, Bakersfield College student and Eastside Community member, said the mural is a nice addition to the neighborhood and brings joy to her heart.

“It’s time to lift up our youth by acknowledging them (and) letting them know they are powerful entities and can accomplish anything they set their mind to,” said Cid. “The mural’s name ‘Bloom’ has a message for all the young little girls: to evolve in abundance, to flourish their beauty and excellence in life (and) to never sell yourself short.”

The community has planned an event on Jan. 18, Martin Luther King Day, to head to the mural and paint the left side of it. The mural has already had much help from volunteers, including teachers, senior citizens and young artists, according to Hathor.

In conjunction with the mural “Bloom,” Gonzalez is installing the first solar powered street lights in Bakersfield  with a bike path and sidewalk with some trees as well. It will complement the City’s planned Kentucky Street Greening Project, a walkability-improvement project from Beale Street to Mt. Vernon.

Gonzales said he plans on adding more murals on the East Side of Bakersfield.