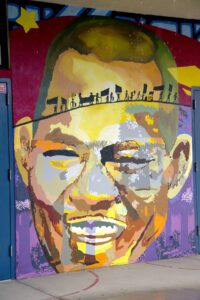 On October 25 in Delano, Morningside Elementary revealed the mural of Filipino labor leader Larry Itliong at the school library.

Larry Itliong immigrated to the United States from the Philippines in 1929 and immediately began working as a farm laborer. He was passionate about helping out the poor and he came to Delano on September 7, 1965 and convinced the grape workers at Filipino Hall to vote to go on strike.

Patty Itliong Serda, the school’s librarian, helped push for this honor at the school and now October 25 will be officially known as Larry Itliong Day.

Artist Eliseo Art Silva, created this mural to represent and honor the legacy of Itliong.

“For us to tell our story, it has to become art,” said Silva. “We don’t have a Cesar Chavez in America. Larry Itliong is the first Filipino American to get a seat at the table. His story is important and has encouraged Filipinos.”

He said the design was inspired by some students as they provided drawings of Itilong and he actually incorporated parts of those drawings in the mural.

Morningside principal Ricardo Chavez said Itliong not only helped the farm workers of Delano, but also helped his family.

“It’s not easy work, and it’s not appreciated enough.“We would not have a community in Delano without the farmworkers,” said Chavez.

Not only did the city of Delano honor Itliong with the mural, but they also opened a resource center in his honor in Poplar, California.

“Today has so much meaning for all of us here,” said District Trustee Susann Villaruz. “We met quite a bit of people who want to make a pilgrimage to Delano to learn about the labor movement and Larry Itliong.”

“I grew up in La Paz with my family. My father worked for Cesar Chavez in the office and my mother worked with the kids,” said Bonta. “Larry said we had a responsibility for the people. He said we could do it the easy route or the right route. He chose the right route.”

Bonta also said we remember the heroes who led, especially the early farm workers who came here alone and fought for change.

“When you fight for justice, you can realize justice,”said Bonta. “And also so we inspire our next generation to make sure they know people that look like them from their communities fought and made change to this great state and in this nation.”