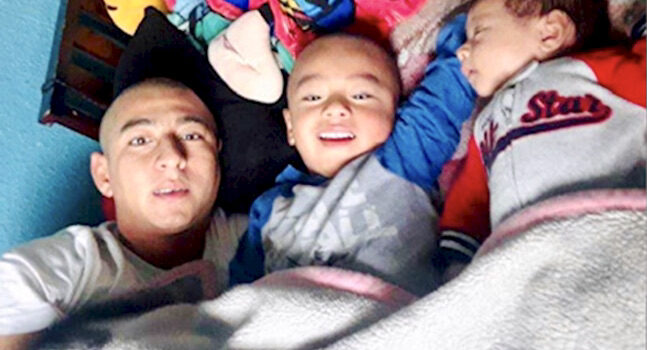 After spending more than 1000 days away from his family—and nearly three years in ICE custody— for a crime he didn’t commit, Salvadoran father Willian was finally able to reunite with his family and community on October 25 with help from a local coalition, the Rapid Response Network of Kern.

After immigrating to the United States to escape a violent and hostile environment, Willian’s trouble with the law began in Maryland in 2015. He was with a friend at a convenience store when a shooting broke out. Despite having phone record and video evidence of him being on the phone at the time of the shooting, the victim identified Willian as the shooter.

Because of this, Willian was charged with three counts of attempted murder and facing life in prison. After a year in custody, however, Willian was offered a credit for time served by the State’s Attorney if he pleaded to aggravated assault with a gun. Willian chose to take a please and, because of a sanctuary law, was allowed to leave custody.

A year later in the Bay Area, ICE raided Willian’s home, arrested him, and put him in immigration detention. Willian’s previous conviction led immigration authorities to try to deport him—even though he was innocent and had no other convictions. Willian has spent years fighting his case because his life is in danger in El Salvador if he were to be deported.

The Rapid Response Network of Kern, a coalition of local organizations, community leaders and immigrant rights advocates was established in February 2018 with the goal of responding to the needs and challenges of immigrant communities who are targeted by increased immigration enforcement activities.

The Rapid Response Network of Kern has provided assistance to detained immigrants by raising funds for the Kern Freedom Fund. This fund provides bond money for immigrants detained in Mesa Verde Detention Center here in Bakersfield.

Diana, Willian’s partner and mother of his children, was informed about the Rapid Response Network for Kern by Willian’s lawyer and, with help from the Kern Freedom Fund, she was able to come up with the money to pay Willian’s bond.

“When they told me about the program, I couldn’t believe that there was a lot of people that wanted to help,” Diana stated in an interview. “We really appreciated it. Having two babies, it was hard for me to pay all the bond. I don’t have the words to say thank you.”

On August 6, 2021, the Court vacated Willian’s conviction, having found his plea was legally invalid and his attorney failed to present defenses showing his innocence. Willian now has no convictions at all.

“I feel so happy because it was so hard for me before, having two babies, because I still had to work.” stated Diana, Willian’s partner and mother of his children. “Now he’s supporting me and and I can see that my babies are so happy to see their daddy.”

After being forced away from his family for so long, Willian looks forward to being a good father and raising his babies. Now that he’s free, Willian and Diana hope to spend the rest of their lives together and dream of finally being able to get married.

Willian has put together a strong release plan, recognizing that after years of incarceration during his formative years, he wants time to transition back to the community in a year long faith-based residential program, where he will be able to heal from some of the traumas he has suffered while incarcerated.

Victoria Rodgers is an editor and reporter for Kern Sol News. Born in Bakersfield, CA, she received her Bachelor of Arts in English from Rockford University in Illinois. She can be reached at victoria@southkernsol.org.