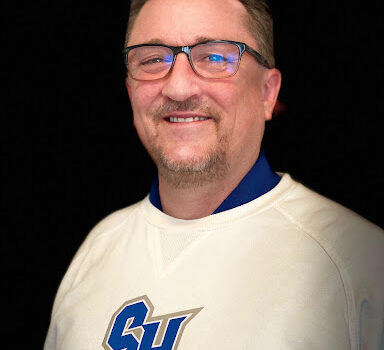 Dyar, who has been a CAHPERD member since 1987, has presented at their state conferences several times and served in various leadership positions over the years because he believes deeply in the organization and its mission.

“To receive the Clark Hetherington Honor Award from them is incredibly moving and humbling. There are so many people in CAHPERD who I admire tremendously,” said Dyar.  “It’s hard to imagine being honored in this way and placed in their company. But I am honored that the work I’ve done to advance the profession and advocate for quality PE at the local, state, and national level has been recognized by my peers.”

Dyar began his teaching career in 1991 at Fresno Unified. In 1992, he moved back to Delano with his wife and spent the first five years of his career in the classroom, teaching 3rd, 4th, and 6th grades. He then started teaching PE in 1996 at Cecil Avenue Middle School.

“Teaching is the only profession that allows someone, on a daily basis, to touch and guide the lives of young people.  It is extremely gratifying to be a positive adult role model, and to just spend time with the kids and share their successes and failures, their joys and disappointments, and their struggles to grow,” said Dyar.

When he was six years old, Dyar fell and suffered a head injury that required surgery, including the placement of a shunt to help circulate the spinal fluid around his brain.  Over the years, he has had seven additional surgeries to replace the shunt when it failed. The first of those seven surgeries occurred before his 21st birthday when he was a junior in college.

At that time, Dyar was studying business.

During his recuperation and subsequent physical therapy, he had one of those “lightning bolt” moments that made him realize that the only time he was really happy was when he was active. The surgery had temporarily taken that away from him, and he wanted it back.

“Then it hit me that I wanted to share that love of activity with children. I had a lot of time to think in that hospital bed.  All the great teachers who had influenced me came rushing back to my memory. I wanted to touch young lives like that. I wanted to be a physical educator,” said Dyar.

He had six more surgeries since he began his journey.

“Each setback has only strengthened my convictions. I love activity.  I love being a physical educator.  I want to share that love with every young person I meet.  My personal health experiences have shaped not only the kind of teacher I am, but who I am as a person,” said Dyar.

Dyar said PE is important to teach in school districts. He said Kern County has many pockets of poverty with many families living below the poverty line, so he knows very well how poor nutrition and lack of physical exercise affect the children. He also said that PE must begin with our very youngest children.

“It goes without saying that we believe that every child in the United States should receive a minimum of 60 minutes of quality physical education, every day that school is in session,” said Dyar. “Those of us in the field believe that it is imperative that education is restructured and that the discipline of Physical Education is given the same full weight and value as we give to mathematics, science, language arts, and social science.”

Dyar uses Project Adventure, or team-building games, as a very powerful means to teach students how to become better people. His entire department works very hard to help the kids develop a sense of community at school.

“One year when I was teaching, our work paid off in an unexpected and powerful way.  The sixth and seventh-grade students were learning two new aerobic routines that the 8th graders already knew,” said Dyar. “So I asked the eighth-graders in the first period to stand next to a sixth or seventh grader, if they felt comfortable doing so, and help them with the different moves.  Every single eighth grader went to help.  I was happily stunned.  But later I was moved to tears as the same thing happened in the second, third, fourth, fifth, and sixth periods.”

Dyar said there was some magic in PE that day, and he will never forget it.

“I have been able to realize my dream of giving back to the community I grew up in.  I created the social-emotional development aspect of our physical education curriculum,” said Dyar.

Dyar said teaching is more than a profession, and it is certainly not a 9-to-5 job.   It requires you to deliver a joyous message of opportunity and accomplishment as you minister to the needs of every child with whom you are blessed enough to come into contact. He said if you have a passion for sharing the lives of young people, and if you have a passion for doing everything in your power to make their lives better, then teaching is for you.

“Teaching is a calling. The key is passion.  The passion will keep you young, and give you boundless energy.  If you have the passion, you will never feel that you’ve worked a day in your life,” said Dyar.