Turf Battle: When the Baseball Diamond Becomes a Soccer Field 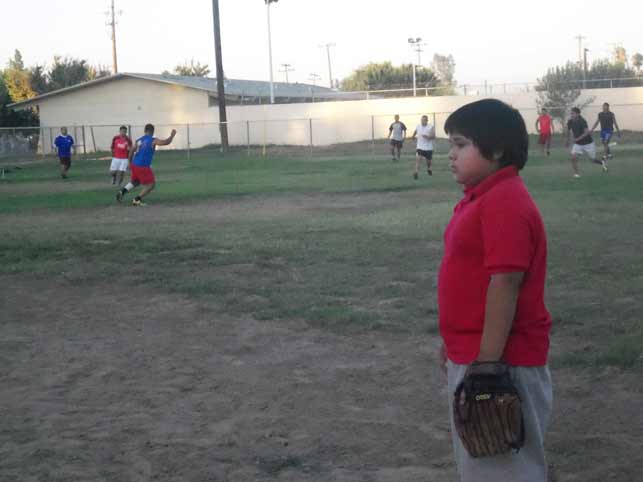 LAMONT—On any given afternoon or weekend, you can find the benches on one side of Lamont Park being occupied by a group of abuelos (grandpas), tios (uncles), fathers and sons, casually playing a game of cards or dominos.

On the other side of the park where the sports field is located, however, it’s a frenzied battle for territory. No, I am not talking about gangs fighting over ‘their turf.’  I’m talking about the ongoing battle between the baseball players and soccer players.

The space that is prized by both groups, above all others, is the baseball diamond.

The problem for the baseball players is that the diamond, despite being intended and traditionally used for (you guessed it) baseball, is now occupied regularly by soccer players.

“It isn’t cool how they think they (the soccer players) can just take over like that,” said Alfredo Avina, 20, a baseball player. “There is a reason why it’s a baseball field and not a soccer field.”

But with the way the park is currently set up, if you want to play a traditional game of soccer, you’ll definitely have to interrupt a baseball game.  There is a shady area, between the Kern County Library, Lamont Branch and the Kern County Department of Human Services.  Just to the right of the area is where the domino and card players sit on their benches. In back of the Human Services building is the “soccer playing space” and baseball diamond, which basically occupy the same space.

The lack of adequate space is a bigger problem than most people realize, because it’s not just about friendly games being interrupted once in a while.  People get angry.

Once, while I was playing baseball with my nephews, a couple of soccer players decided to start a game right next to us. About half way through our game, they kicked their soccer ball into the area where we had secluded ourselves to playing (we were trying not to bother them.)

All we heard in the background was one of the soccer players say, “Just run him over and then he’ll leave.”

I was in shock and my nephews were afraid to be there, because they didn’t want to get hurt.

I took my cousins home, and before we left a lot of the soccer players were laughing at us. I am guessing because we left without a fight.

Because of the space issues, these innocent games of baseball and soccer can even turn violent.

“Everyday, we literally fight over this field. I remember one time we were playing (baseball) and we hit the ball into the outfield and hit someone (a soccer player) in the head. They got pissed and wanted to fight with us,” said Avina. “Our only argument was that they should learn better how to be in the outfield while people are playing baseball.  It’s too dangerous for them to be out there.”

Youth and adults alike who love baseball are not able to play the sport for the simple reason that every time they go to play, the soccer players kick them out or literally interrupt their game by running right into it.

Although there’s more room to play soccer at San Diego Park, which is less than five minutes away by car, many soccer players say they’d rather play at Lamont Park.

Christian Lomejo, 26, said he knows there’s another park but he and his friends don’t have the time to go across town to play soccer. They get out of work at 5 p.m., he said, then they play soccer at 6 p.m. so they can get home to eat dinner by 8 p.m.

“It not fair that you (baseball players) think you can dominate everything,” said Lomejo.

For now, anyways, it looks like there’s no end in site to the turf battle at Lamont Park.