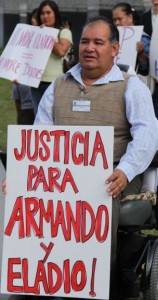 This meeting was after the deaths of Armando Ramirez, 16, and Helandio, 22, ingested highly toxic hydrogen sulfide fumes while cleaning the drainage system tunnel at Community.

Baubenviscel attended this meeting to interview former and past employees to help him improve the facility and make it a better and safe facility for present and future employees. He asked those present to talk about any violations they have seen and answer their questions.

“I really want to help you but, we need your help, we work for the employees not the company,” he said

Laura Baker, the committee’s lawyer informed the audience: “we have seven pages of violations in the report.”

After hearing some of the violations, a concerned resident shared with the group that last year a man passed out after opening a drainage system tunnel. Luckily, someone was with him. What alarmed the resident the most was that the same man, who was at this incident was the same one present at this year’s fatal accident.

As the meeting continued Baubenviscel spoke one-on-one with the residents, who volunteered to be interviewed. One by one, they stepped in and shared what they felt the company has been doing wrong or any violations they might have seen.

“The same company asked the city of Arvin to rent them a piece of land to make a factory that will recycle plastic and make plastic bags,” said Jose Ojera. “But, many believe that the city of Arvin will not grant them the permission. Due to the face it might pollute the air even more and destroy their environment.”

Cal/OSHA will keep investigating any other violations against Community Recycling.