La Guelaguetza a celebration of culture, pride and unity 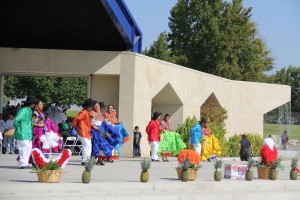 BAKERSFIELD–On Saturday, Oct. 9, 2011, the Unidad Popular Benito Juarez organization will be hosting their annual La Guelaguetza at CSUB to help remember the customs and traditions of Oaxaca, Mexico.

The event will feature 15 different types of entertainment that include dances, arts and crafts, different booths and venues, and two special exhibitions.

Gladys Flores, community outreach representative of UPBJ, explained the purpose of the event.

“It’s celebrated in the native state of Oaxaca,” said Flores, “We celebrate it in California to give the immigrants from Oaxaca something from their native state.”

Flores explained how the children of the immigrants from Oaxaca are sometimes ashamed to say that they’re apart of the Oaxacan heritage.  The Guelaguetza is an opportunity for those children to experience their heritage and become more proud of who they are.

The event will show the youth and the community how rich in culture the Oaxacan heritage is.  It will showcase the roots and customs that have been celebrated in Oaxaca for years.

Each year the Guelaguetza features dances and arts and crafts, but this year the event will have two exhibits that have never been featured before.

“This is the first year we are having the exhibitions where someone is actually coming to show how they do something step by step,” said Flores.

The Guelaguetza begins in July and is hosted in 12 other cities in California such as San Marcos, Fresno and Santa Cruz just to name a few.  Bakersfield is the last city to host the Guelaguetza.

The Guelaguetza, which means Lunes del Cerro (Mondays on the Hill), was first celebrated in 1932 in Oaxaca, Mexico according to www.oaxacainfo.com.  It started as apart of the 400 anniversary celebration of Oaxaca becoming a royal city by Carlos the fifth of Spain.  The Guelaguetza represented all the ethic groups from all seven regions of the valley.  Its been celebrated ever since each year expanding into an even bigger celebration.

This is the fourth year UPBJ is hosting the Guelaguetza in Bakersfield and the first year it is being held at CSUB.

“We think it’s better at Cal State,” said Flores, “Its an educational place to promote the culture.”

The purpose of UPBJ is to have outreach to the indigenous community especially the ones who have a native language.  UPBJ also offers social services, educational opportunities, as well as other services to the immigrant community of California.   UPBJ also hosts several other community events such as the Guelaguetza.