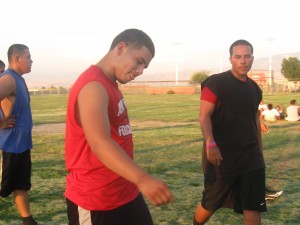 Juan Perez jokes with teammates during practice./ by JESSICA BAUTISTA

ARVIN–Although Juan Perez likes to have a good laugh, when it comes to his education and football: it’s no laughing matter.

This school year at Arvin High School Perez, 16, will juggle school, being the Junior Class ASB President and a varsity football player while maintaining a 3.0 GPA. Not an easy task for some, but Perez does it with an effortless smile.

His favorite subject is math and he uses those learned problem-solving skills out on the field.

“Football is like a puzzle,” said Perez. ”Everything comes together once the whole team does the job they are assigned to do.”

Some might think football has always been in Perez blood with his broad shoulders and athletic built. ‘Not so,’ says Perez.  In fact, he had no intention in joining football as he went into high school, but his friends convinced him to give it a try.

The results seem pretty amazing for the linebacker and fullback, just ask his no. 1 fan- his father.

“I don’t just go to the game to support my son because it’s my job as a father. It’s because I want to,” said the elder Perez. “It’s very important to show children that they have a lot of support.”

Dad is the one who, Perez looks forward to see cheering in the stands along side his fans, coaches and teammates.

Perez couldn’t contain his pride when he spoke of his father’s continuous love and support on and off the football field.

“He’s always on the stands yelling the loudest funniest things,” said Perez, with a great smile. “After the games, people ask me if that was my dad yelling. It means a lot to me.”

Many people see him not only as a jokester, a football player, but he’s also a trustworthy friend.

“He’s the type of guy I can tell anything and everything,” said Hermida. “I trust him a lot.”

When the stadium lights may dim after his high school football years, Perez said he’ll gladly take college offers coaches give him. If the NFL comes knocking on his door, he may answer it too.

Whether or not Perez continues being “a beast on the field,” as Hermida described him, he’ll pursue his dream career as an engineer at Fresno State.

No matter where life will take him in the years to come, Perez will always cherish all the memories at Arvin High.

“Homecoming (2010) was the biggest challenge we had the whole year. We fought until the end,” he said. “I had my family in the stands, so I had to make them proud. It just felt good how the coach would tell me ‘good job’ and my team would support me.”

At this game, Perez scored twice, but off the field he had scored something more than game points.

“If it wasn’t for football, I wouldn’t have the great friends I do now,” he added.