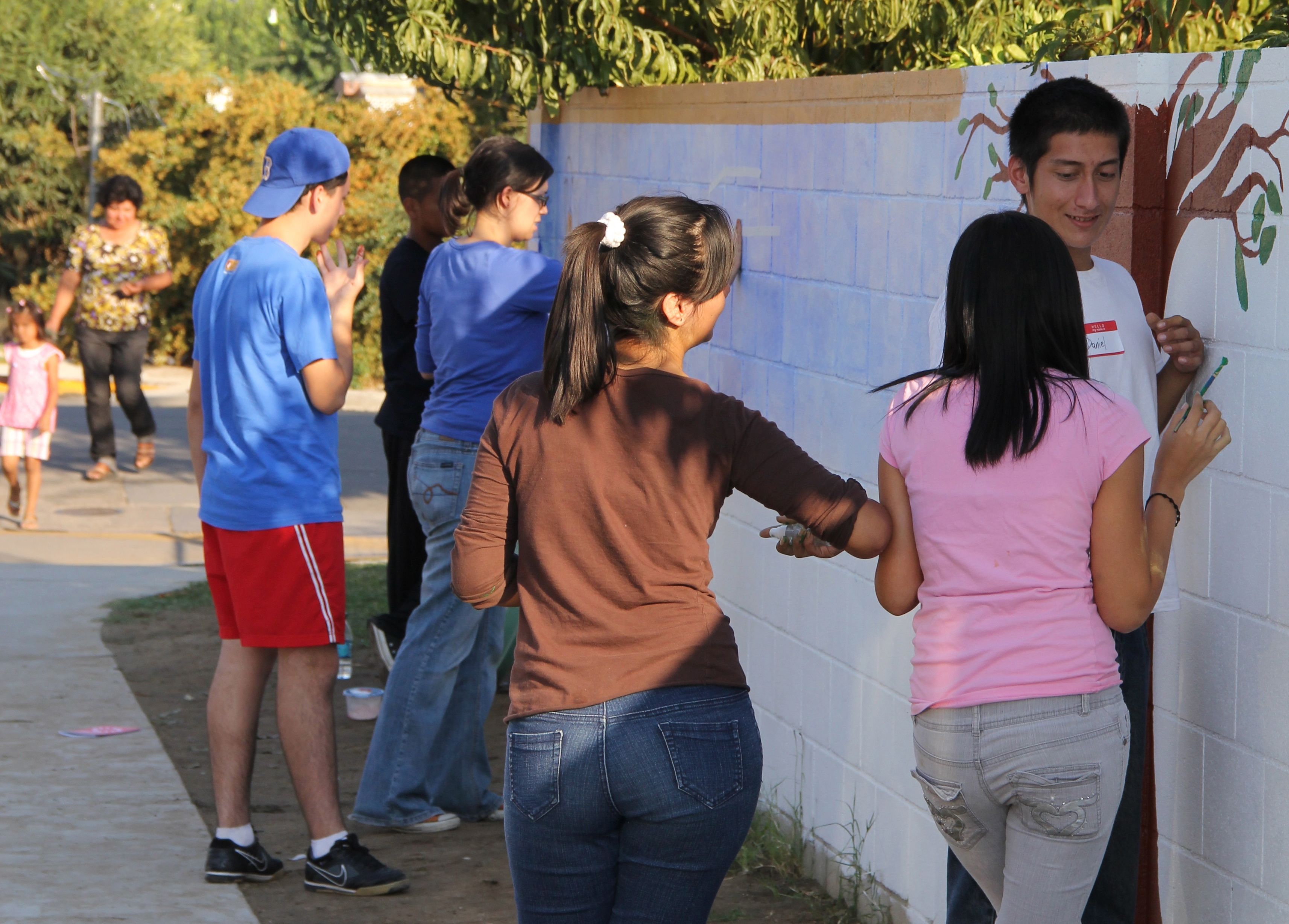 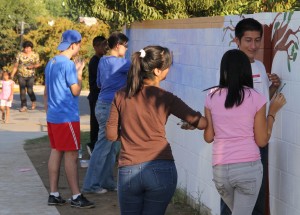 DHF youth work on a mural./ by JOSE 'PABLO' ANTONIO

LAMONT–The Dolores Huerta Foundation Youth Group is an organization where youth can create events that will be beneficial to their communities and help develop their leadership skills all while having fun and getting to know one another.

“There was not enough recreation in Arvin and Lamont for the youth and we wanted to develop leadership in youth in how to make changes in their community,” said Chavez.

Arvin High School senior Fernando Alonso, 17, said DHFYG is a place for youths to organize events like Haitipalooza and sometimes the outcomes can be the unexpected. Alonso has been a member of DHFYG since the group began, when he was a freshman at Arvin High.

“My most memorable moment was when we did Haitipalooza, which was a zero budget benefit concert at Jerry’s Pizza. The purpose (of the event was) to donate money to the Haiti relief fund,” Fernando said.  “That’s when my realization of our potential grew even more because I did not think we would be able to help our fellow brothers and sisters across waters.”

The DHFYG is for youths between the ages between 13 and 18. Once you’re 18, you can take a leadership role and become an intern for the group or leave the conference room to continue being a role model in your community.

For Jesus Alonso, 20, who’s the DHFYG intern, the group holds a special place for him. Jesus too was once a member of DHFYG and said the thing that separates the group from other youth groups is DHFYG youths take the initiative to help others in the community.

“Hopes are that each and every individual, every youth, comes out of the group a leader,” Jesus said.  “Knowing that they can make a difference in the world and that the youth group becomes a bigger name in the community. So that whenever the youth group has an event, people know it’s the youth group and thereby will have more people in the youth group as well.”

“Every time, every meeting when someone who doesn’t usually speak up. Speaks up, throws out their idea and gets their voice,” said Jesus. “That’s an accomplishment.”

For Gibran Moncayo, 18, who’ll be leaving his seat in the DHFYG conference room and sitting in a classroom in Bakersfield College, it’s means a lot before leaving.

“I thought DHFYG would be people that I wouldn’t get to talk (to) or know. But even though some people left, I feel like we’re still a tighten family no matter what,” said Moncayo. “Since I’m going to college, I think that it will be really hard for me to become an intern while still keeping up with classes. So I just hope that we can get more recruitment from younger generations and that they’re excited about doing this because I know that it’s a great thing to do we just have to get them out here.”

The DHFYG is currently working on a mural and a free-for-all (festival) for the community.

“The mural we want to do is a community mural where we can put our ideas.” Moncayo said. “But have the input of the community so that way it’s not only our mural, it’s everyone’s mural and everyone can feel proud of our community and how it represents our community.”

The free-for-all will be a huge festival where both younger and older generations can come together in the community and listen to local bands and a diversity of music so the whole family can enjoy free of charge.

“Hopefully it goes great and we make it an annual thing,” Moncayo said.

The DHFYG have made an impact in their communities and have learned lot about themselves as well.

Even Chavez has learned something from the youth group.

“What’s most important to youth is having fun but to also be involved in civil groups and that youth are very resourceful and leaders in the community,” she said.