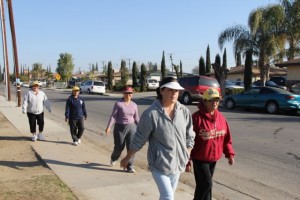 The Lamont Walking Group walks in the morning to make sure they get their daily exercise./ Photo by BERENICE SANCHEZ

SOUTH KERN–It’s almost 60 days into 2012 and most of us made a New Year’s Resolution and broke them.

More than likely it was to lose weight or work toward a healthy lifestyle. You’re not alone, experts say only 12 percent of people achieve their goal. However, community members of South Kern are walking for their health.

A few months ago at Smotherman Park in Arvin was a place used for its skate park or illegal drug activity. Many families didn’t feel safe to play or to walk across it. Recently, a walking path was installed. This is when Arvin resident Maria Tereza Contreras took advantage of walking the path.

“ I was one of those people that asked the city to make a place for people to be able to walk at,” said Contreras.

Contreras was diagnosed with having ‘thick blood.’ She uses exercise to work up a sweat to help the blood circulate and remove toxins in it.

Andrea Sandoval and Contreras both agreed they’re seeing families with their kids on roller skates while their parents are walking. They think it’s a great way families can spend time together.

Sandoval too walks to improve her health.

“I have lost weight and I walk for my health issues,” she said.

Experts say walking can be a solo or a group activity. It puts less strain on the body than running or jogging.

In Greenfield, a group of women decided that walking together in groups or in pairs would be safest option to do. This is how the Greenfield Walking Group was formed.

“The walking group was formed after two residents went to a nutrition class and they told them they should walk, said Gema Perez, who co-founded the Greenfield Walking Group. “Before at Stiern Park people just sold drugs. People did not feel safe, but now the 40 members walk around the park during the winter. In the summer about 60 residents will be walking.”

Both parents and their children are active in the group.

On a personal level walking has helped Perez’s health.

“I’ve lost weight and it has controlled my stress levels,” she said, proudly. “I’ve even lowered my cholesterol level.”

The Greenfield Walking Group has inspired other areas of South Kern to create their own walking groups. The Lamont Walking Group is one of them. The group was created a little more than a year ago. The group walks around Lamont Park, from 8 a.m. to 9 a.m., Monday through Friday.

“Within our neighborhood, we organized ourselves. We wanted to motivate people to walk and the idea got big, because a lot of people had high blood pressure, etc. and we wanted them to have a way to fix that,” said Maria Sanchez, a member of the group. “In your 40 years you lose calcium in your bones and walking helps to get the calcium back, not just with pills.”

Although the group is active, lately, the cold weather has slowed the group down a bit.

“We started off with 18 people, but these days a lot of people don’t go because of work,” said Sanchez. “It’s too cold to walk in winter. Some people have arthritis, so we don’t walk. We couldn’t make it later (in the day) because people are busy.”

Sanchez said once the weather warms up expect to see the walking group in full strut.