LAMONT–With paintbrushes in hand the Dolores Huerta Foundation Youth Group has done it yet again.

Another mural is underway but this time, on the other side of town. The first mural was painted on Palm Ave. and San Gorgonio St. in 2010. The three walls that make up this mural is known as Chicano Alley. One of the walls includes the words “El Destino de La Raza.”

Jorge Guillen collaborated with the youth group in order to bring the ideas to life in a mural. The theme of this mural is ‘Younger generations are grateful to older generations for sacrifices made on their behalf; younger generations will reciprocate through their efforts to improve the lives of generations that follow.’

The Dolores Huerta Foundation Executive Director Camila Chavez believes the community has played a part in the making of this mural. Chavez helps oversee the DHF Youth Group. The group meets on every Friday afterschool.

“They haven’t tagged on the wall…and so I feel like that is the community…supporting (us) and saying we like it, we respect it and were not tag it up,” said Chavez.

Parents of the youth were also a big help, whether they stored the paint and supplies in their home or actually going out there and helping paint parts of the mural.

Silvia Avila, 17, and a 3-year veteran of the youth group said the mural is more than just wall with pretty pictures.

“I think that the mural is going to influence the community, to show them that we don’t have to have graffiti, that we can have something better and actually show positive messages through our art,” said Avila. “To me the mural is our effort, as youth, to try to improve the community. I think that it might be a small thing, but to me it’s significant because when I grow up and I go to college and come back, I can see it there and I can think that I was part of it and I tried to clean up graffiti and that I actually did something good in my community.”

The youth’s completed another mural located on the corner of Myrtle Ave. and Segrue Rd. Barbara Carrasco and Nathalie Sanchez are muralists from Los Angeles assisted the youth in this mural. Carrasco is a renowned artist and muralist. She’s also Dolores Huerta Foundation’s Board of Directors. Most of the painting was done on weekends or on vacation when the youth is not in school. They worked on it for 5 hours a day.

They have been painting since October 2011 but there was a lot of planning before that, approximately 4 to 5 months. In those 4 to 5 months they looked for a wall, brainstormed ideas, and put it into a sketch. The youth drew what they wanted to see painted in the mural and in the end. Berenice Sanchez, who’s a photographer/reporter at South Kern Sol, put all the sketches together. 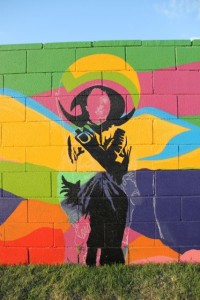 Another section of the mural located on Chicano Alley./Photo by BERENICE SANCHEZ/South Kern Sol