Solis An Ally For Workers’ Rights 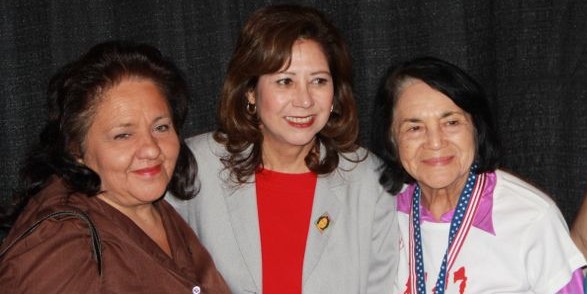 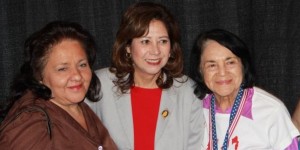 Secretary of Labor Hilda L. Solis spoke at the 50th Anniversary Convention of the United Farm Workers Union on May 20.

Solis, who has been an ally of the UFW, spoke about her parents’ work ethic they made her the defender of the rights of workers. Her mother worked in the assembly at Mattel while her father worked at a battery plant in the City of Industry. He father was a steward for the Teamsters union. Solis was one of seven children and the first to go to college. She was the first Latina elected into California’s Senate. After her speech, Solis took time from her busy agenda to speak with the press including South Kern Sol reporter Clara Bruno.

Solis: First off, I would like to say, this is a big honor to be here today to celebrate the 50th Anniversary of the establishment of the UFW and to be here with my friend Dolores Huerta, who by the way we honored today in the Department of Labor. It’s an honor because she has fought hard for us and we know there is still a lot to be done to protect the people that work in agriculture, the farm workers and also to protect the rights of every worker in this country. It gives me great pleasure to be here today to celebrate with all of you, especially with the workers. I want them to know that I am ready to help and to fight for the rights and dignity of every working person. It does not matter, if they work outside in the sun or if they work in a restaurant or if they work in an office. Everyone deserves to be protected by the federal laws and that is why I am here, to celebrate every person that works in the fields. Our office is to help any person that works. It does not matter if you have your papers or not because the laws are clear and they protect every single person that deserves their minimum wage salary or overtime pay. We are also here to help the people that have problems at their jobs such as not getting paid. You can call our office to get protection and so we can do the investigation. This information stays confidential in our office.

Question: I have a question on an event that happened. It’s almost going to be 50 years when there was an accident in Tulare California in the Valley of Salinas where 32 braceros died. This event is regarding the dangers of this workplace and I wanted to know if you would accept an invitation to participate in this historic event to recognize the struggles of the farm workers and to get to know the working conditions and where they live?

Solis: Well right now I am focusing on worker’s rights. I don’t know, you would need to send that information to us and we would need to check it.

Question: Were celebrating 50 years at the UFW ad you mentioned there is much more that needs to be done to protect workers’ rights. What do you see happening in the next 50 years or throughout the whole year in the federal government?

Solis: Well hopefully we will see immigration reform. That’s going to be a big plus for the millions of farm workers, who currently don’t have a legal status in this country. So continuing to work on that, on AG jobs and making sure that they have continued protection in the workplace and to know that the laws protect all of them. It has to be clearly be implemented at every level, not just the federal level but also the state level and local government as well as community based organizations. They have a role to play here as well. They can also contact and work with our offices as I mentioned in my speech. We are working with the consulate offices in Mexico, El Salvador and many other countries. Where we are pushing out our education campaign so that all workers, honorable workers, understand what their rights are and that there is confidentiality during the investigation. So they will feel comfortable and trusting with what our work is on their path.

Question: Yes I have a question. In 2008, an incident occurred in Stockton a young 17-year-old pregnant girl died. The majordomos and contractors are not being punished like the law says. Would cases like these be under your administration?

Solis: Well, we need to work with the Gov. Jerry Brown’s office and the Director of Labor, so we can find out what they are doing because it needs to come from our local offices first.

Question: Secretary Solis, you have always supported the UFW by attending events like this. Personally, why is it important for you to be here in person?

Solis:  Because we have done a lot and accomplished to make many rules to help the people that work in the fields. I know it is the President’s priority to continue to protect the rights of the working person.

Question: What is your opinion or what do you want to do regarding teenagers working in the fields? You always talk about the adults but what about the teens that work in the fields?

Solis: Well we are always going to enforce the laws that protect children especially the teens that are getting paid for this type of job. This is very important and we are going to keep fighting because we haven’t accomplished everything we want but we also need the public to talk to their representatives so they can support these rules. 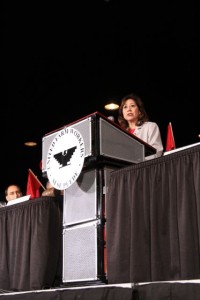