At South Kern School, A Recipe for Success 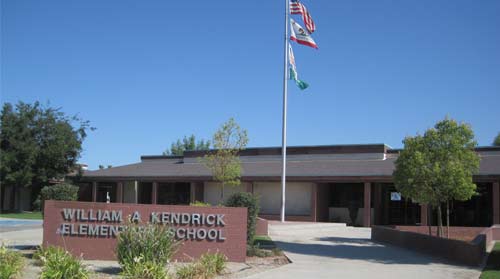 BAKERSFIELD, Calif. – With the beginning of the school year fast approaching, parents and students alike are gearing up for new classrooms, new teachers and, for many, new struggles. But for one school in California’s Central Valley, meeting those challenges is made easier thanks to two innovative programs.

“A lot of schools have parent conferences and stop there,” says W.A. Kendrick Elementary Principal Luke Hogue. “What we do is at the end of the 1st trimester, we have a mandatory meeting with parents so they see their children’s data.”

Through these Parent Data Nights, says Hogue, teachers are able to engage more directly and, as it turns out, more productively with parents. “We walk parents through five visual charts with substantial background data [on their child’s performance] and give them strategies on how to help,” he adds.

Parents are also given a form with detailed information on how their child is performing in each subject and where they stand in comparison to all other students in their grade level. In addition, Kindergarten teachers send out periodic “pacing guides,” showing parents exactly where their child stands with respect to state standards.

Begun 5 years ago, Hogue says the meetings help address the gaps that exist in how parents understand the educational progress of their child. The additional information, he explains, allows parents to narrow down their child’s specific problem areas.

“Many parents did not have the vital information of ‘how’ their child was performing with regards to peers, state requirements, pacing, etc.,” he adds.

Located in the largely agricultural South Kern County, over 80 percent of W.A. Kendrick Elementary’s student body comes from low-income families, many of them Spanish-speaking where English is not the first language.

Countywide, close to 30 percent of children in South Kern live in poverty, compared to the state average of 18 percent. Some 40 percent also come from single-parent households, according to Kidsdata.org, which tracks the well being of young people in California. Studies have consistently shown that such children perform less well academically than their peers from more affluent backgrounds.

Still, despite these challenging demographics, Kendrick outperformed a majority of schools across the state in English Language Arts and Math for grades 2 through 5, earning an Academic Performance Index score of 870, above the state average. The API is a tool used by the state to measure individual school performance. Such statistics are part of the reason Kendrick was recognized as a 2012 California Distinguished School.

Teachers and parents credit the school’s success to the extraordinary level of communication that comes out of these meetings, allowing both to address problems that might otherwise go unnoticed until it becomes too late.

“Parents walk away not only knowing exactly ‘where does my child fit’ but also ‘what can I do as a parent’,” says Tangie Piper, a 4th grade teacher who has been at Kendrick for 6 years.

That was certainly the case for Raul and Delia Castaneda, whose daughters Evelyn (10) and Ashly (5) both attend Kendrick. The couple, who also have two high school age kids, say their schedules leave little time for parent involvement, adding that thanks to Parent Data Night meetings, they’ve been able to stay on top of their kids’ academic needs.

“Evelyn’s reading went down a little bit so they let us know where to check out books and which ones she should be reading,” says Delia. “For Ashly, the only problem was her letters and sounds…and they let us know how to make our own flash cards at home to help her sound out letters and words.”

On its website, Kendrick assures prospective parents the school strives to “facilitate the greatest amount of students’ achievement.” Part of that effort also includes a program called Response to Intervention (RTI), which Principal Hogue says is aimed at preventing kids from falling through the cracks.

Begun five years ago, RTI looks to help students with below average reading levels. Students who test below their grade level are placed in a STARS group for 30 minutes a day, where they receive focused instruction intended to help them improve their scores before they enter more intermediate levels.

That culture of cooperation and communication also extends to faculty at the school, where teachers work together to address a student’s specific needs.

“If I have a child in 4th grade that is still struggling with phonemic awareness,” says Piper, “I can buddy up with a 1st grade teacher and send my student to them for extra help.”

For Piper, Kendrick’s success stems from its mission to ensure that everyone gets involved. “[It’s] about the teachers, the staff, the custodians, and the parents… Every single adult is held accountable.”