Greenfield Youth and Families Want Their Parks Back 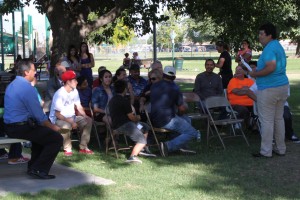 BAKERSFIELD – Residents of Greenfield, a neighborhood in southeast Bakersfield, are becoming increasingly disturbed by the amounts of broken glass, and cigarette and cigar butts, that are littering play areas in Rexland Acres Park.  So much so, that some locals have decided to organize in an effort to “take back” the park, which they say has been less and less frequented by families and increasingly by gang members. At the forefront of the effort are a group of youth organizers, who were among the first to identify the issue.

“We had a spring clean up at the parks and we noticed that all the South Kern parks had an abundance of cigar buds and glass from alcoholic beverages, and that is when we decided to take action to make the parks cleaner and safer for families and kids to enjoy,” said Jose Pinto, a member of the local Building Healthy Communities youth group.

Pinto continued: “My personal experience at Rexland Acres Park when I did live there was that we were not allowed to go to the park because there was always people smoking and drinking. I think that the people who smoke at the park are gang members and people who are up to no good.”

At a community meeting organized by the youth group in Rexland Acres Parks on July 11, residents discussed the issue of alcohol and tobacco usage in the park. Many said that not only have they been approached by people selling marijuana at the park, but they have also seen people drinking and urinating in public, instead of walking to the public restrooms that are available to park goers. Residents also voiced concerns about broken glass that is being left behind next to the children’s playground, and in the parking lot.

“I’m sure the alcohol and tobacco has always been an issue, but there was no one to bring it to light,” said Pinto.  “But now that we, the youth, are at an age [where] we see things differently, we can make that change.”

Kern County Parks and Recreation director Bob Lerude attended the meeting to determine whether there was enough community support for imposing alcohol and smoking restrictions at the parks, to justify him taking the issue to the Park Commission for a vote.

“Exactly what you folks are doing here tonight is what you need to do. We have done this in Lamont Park, Virginia Avenue, Heritage Park, and we are also getting ready to do this in Arvin and in Weedpatch — and every time we get the community out [and] willing to work with the department and the agencies, many good things happen,” said Lerude.

“The commission has voted [in favor] every single time that the community says they are in support,” continued Lerude.

The proposed rule changes are not intended to ban alcohol entirely, but create a process for greater accountability, said Lerude.

When asked if there has been any opposition to the proposed ordinance, Pinto said, “We do have a strong group of families that support the ordinance, but like in every case there are those who oppose it. We have the support of the community. As of now I believe we have about 700 signatures of support.”

Not all Greenfield locals are thrilled with the proposed ordinance. Dolores Perez, a mother of three, says the alcohol restrictions will put a damper on families wishing to use the facilities on weekends for birthday parties, holidays and other family gatherings. “I would not bring barrels or anything, but I would like to bring a little ice chest for my guest,” Perez said.

Perez also expressed concerned over the fact that people can no longer smoke at restaurants, and feels their rights are increasingly being taken away. “I don’t smoke and none of my family smokes, but I just feel like it’s taking more of people’s rights. What if someone is at their home and wants to come and smoke at the park to get away from their family?”

“The government is just taking too many rights away from people. You are giving the cops more reasons to approach people,” Perez concluded.

Once Kern County’s Parks and Recreation Commission votes on putting the restriction in place, it will be taken to the Board of Supervisors for a hearing. Lerude said the process takes approximately 60 days and includes taking the proposed restriction to County Council in order for its language to be drafted.

The Parks and Recreation Department will then put up signs in English and Spanish, stating the details of the restriction.