Arvin’s Academic Decathlon has a History of Success, but Not Recognition 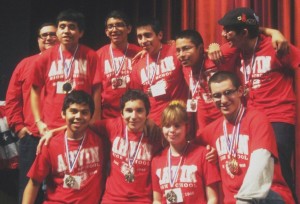 When people ask what I did during my high school career, I respond by saying “I was involved in various clubs, tennis, choir, AP/honors courses, We The People (a constitutional knowledge competition), and Academic Decathlon.” I usually do not need to explain what any of those extracurricular activities are – with the exception being Academic Decathlon, which no one in the Lamont/Arvin area seems to know about.

I am a four year veteran of Decathlon, so I believe I have the necessary credentials to explain what it is. As the name suggests, Academic Decathlon is an academic competition comprised of ten subjects ranging from math to music. Each year is focused on a certain topic, such as the French Revolution or Russian History.

High school students in Decathlon spend hours studying this material in an attempt to make the final team of nine; three students from an honors (or “A”) group, three from a scholastic (“B”) group, and three from a varsity (“C”) group. Placement into these groups is determined by grade-point average (GPA).

Then, once these groups have been determined and the team has been formed, these students proceed to study even more in anticipation of the regional (county) competition that takes place on the first Saturday of February.

And finally, there is an entire day of testing dedicated toward seven subjects, with a mixture of questions from all subjects (called Super Quiz) being open to the public.

Individual medals are awarded as well. Each subject awards three medals to each student in the GPA grouping.  However, with over 200 students a year vying for the first three ranks in each subject obtaining a medal is a difficulty.

There you have it! You now know more about Academic Decathlon than your neighbor.

But I’m not writing this simply to tell you what it is. I’m writing because I believe that this program should be a source of pride for our community. Instead, it is largely unknown and often overlooked by nearly everyone.

On a more personal note, I have managed to collect nine individual medals, but even then my personal success in Decathlon can only be considered above average by Arvin High’s standards.

So now I must beg the question – why does the success of Arvin High go unnoticed?

Matthew Regpala, Arvin High’s Decathlon head coach had this to say, “I think it is because Arvin has so many teams that do well, it is easy to not notice ours. Also, our society tends to recognize and celebrate sports more than academic competition teams.”

For parents and students, you should know that when I received my acceptance letter from UC Berkeley the admissions officer specifically mentioned my involvement in Decathlon as a contributing factor toward my acceptance.

Regpala added truth to this statement, “Academic Decathlon students generally do better than their peers. Over the years, we have sent students to MIT, Princeton, and Yale.”

Furthermore, a study conducted by New York researchers between 2011 and 2012 discovered that there is a linear relationship between a students’ GPA and their friends’ GPA. In short, students tend to emulate the academic success of who they are around.

With this, we can infer that the Arvin Decathlon program, because of all its success, is enabling academic success by taking the best and brightest students the school had to offer and putting them all into one team.

As I stated before, Decathlon should be a source of great community pride. It is for me, but then again, I participated first hand in the program itself.

Decathlon is an exciting competition, even though the Arvin program is a time consuming endeavor. I remember how at the last Super Quiz the entire audience looked stumped when the questions were read aloud for the students to hear.

“What Russian activist fled to Finland due to political oppression instituted by Tsar Nicholas II?”

That question gives you an idea of how intensely we at Arvin High strive for excellence.

Oh, and by the way – the answer is Vladimir Lenin, father of the Russian Revolution.