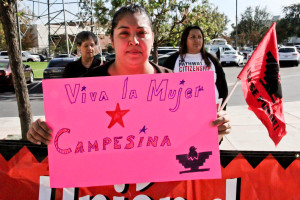 BAKERSFIELD – The Central Valley became ground zero in the struggle for immigrant rights last week, when a coalition of women activists gathered outside of Congressman and House Majority Whip Kevin McCarthy’s office in downtown Bakersfield to take part in a demonstration and act of civil disobedience to demand an end to deportations, and congressional action on federal immigration reform.

“We came here because McCarthy is an influential man in Washington who can put immigration reform to a vote,” said Estela Garcia, a demonstrator at the event. “We’re here to make our voices heard and to make sure McCarthy knows that families are being torn apart.”

The demonstration, which took place on Wednesday, November 6, included a march, songs, and testimonials by those affected by the deportations. Some demonstrators also staged a sit-in inside McCarthy’s office.

McCarthy has been singled out as a key player in efforts to pass a federal immigration reform bill because of his status as House Majority Whip, and because he represents a congressional district in the Central Valley with a large population of Latinos yet has thus far refused to commit himself to the issue.

When McCarthy’s staff told demonstrators that the congressman was meeting with a South Korean ambassador and would not be able to see them, many committed to staying as long as it took until he arrived. One demonstrator said her husband was deported several years ago, adding that after waiting that long to see him, she could wait a few hours for McCarthy’s return.

McCarthy did finally meet with the protesters in his office, just after 11pm.

In what could be called a small victory, McCarthy promised to move immigration reform forward by next year, but he did not sign a pledge to push for a house vote on immigration reform by this year, said the UFW’s Maria Machuca, because he doesn’t think there is enough time — there are only 13 days left until the end of the year.

A number of organizations from across the state were represented at the day’s action, including the Dolores Huerta Foundation (DHF), United Farm Workers (UFW), and Coalition for Humane Immigrant Rights of Los Angeles (CHIRLA). The participation of other non-Latino organizations, such as Korean Resource Center (KRC), demonstrated the ethnic diversity within an immigrant rights movement that is often viewed as monolithic.

“We don’t see immigration specifically as a Latino issue,” explained Jenny Seon of KRC, based in Los Angeles. “The immigration issues affecting Latinos now affect all of us, and have been affecting all of our communities for a long time now.”

At the heart of the protest were the compelling stories told by immigrant women who are fighting to keep their families together.

“We’re conscious that we are the ones who have to take the initiative and have the courage to take action,” said Mily Treviño-Sauceda, president of the National Alliance of Farm Workers. “We have to fight for the unity of our families and for our visibility as women.”

“We also begin our mobilization from the home,” said Ramona Felix of Women Farm Worker Leaders. “It is women who face lower wages, higher work hours and sexual harassment and assault at work, all because of a lack of comprehensive immigration reform.”

“Because we’re women we are overlooked and brushed aside, yet we are the ones who bear the brunt of these policies,” Felix concluded. “This is why we are the ones to act.”