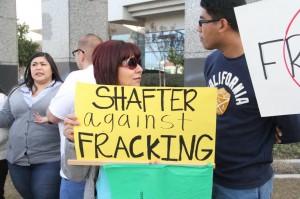 BAKERSFIELD, Calif. —  About 100 people packed into a chamber at the Kern County administration building in Bakersfield to testify at a public hearing Wednesday on the state’s new fracking regulations, saying they are already at a breaking point with pollution in their communities, and that they’ll be impacted the most from the state’s new fracking plan.

The California Department of Conservation’s Division of Oil, Gas & Geothermal Resources (DOGGR) is seeking community input on regulations of a controversial oil extraction method known as hydraulic fracturing, or fracking, put in place with the passage of SB 4.

Hearing attendees expressed concern over the potential harm to air and water from fracking, in a region already burdened with air pollution and groundwater contamination.

“We live in a town that’s right next to the largest hazardous waste dump in the Western U.S.,” said Marisela Mares a la Torre, who is a part of Greenaction, an environmental organization based in Kettleman City in Kings County. “We’ve long suffered from arsenic in water due to pesticides, the bad air quality that’s all over the valley, and now they want to frack and cause more pollution.”

The regulations go into effect in January 2015 – those regulations are open for public comment now; however, interim regulations regarding “water quality monitoring and testing and public transparency” before the final rules are approved are in place now, according to DOGGR.

“Our people are coming to a breaking point,” said Maria Saucedo, who is also part of Greenaction. “We can’t take anymore and we have to get involved.”

Saucedo says her involvement in environmental issues began four years ago, when her infant daughter died as a result of a birth defect that she believes was connected to environmental toxins from a hazardous waste dump site in Kettleman City.

“Four years ago, my daughter died at 11 months of age from a rare birth defect,” said Saucedo. “Doctors said that it occurs once in every 10,000 births, but our small town has had four children already with the defect and it’s because of pollution.”

Cities in the San Joaquin Valley, such as Bakersfield and Shafter, are already home to oil drilling operations, and oil derricks dot the landscape. The region was historically a major producer of oil for the state, but production had declined until the advent of new technology and drilling methods (hydraulic fracturing) that may be able to tap oil from harder to reach sources.

Fracking is an oil extraction process that involves drilling hundreds of feet into the ground, below the water table, and pumping a mixture of water, sand and known carcinogenic chemicals into the ground to release oil (and sometimes natural gas) found in shale deposits.

The risk for contamination of ground water is increased in oil wells that are not structurally sound. In these cases, toxic chemicals injected into the ground may leak into the groundwater.

Those wells have been the subject of intense scrutiny not just by environmental activists but also by members of the community.

Ralph Venturino, senior staff council with the Department of Conservation, explained the goal of the forum and how it relates to the larger process happening in Sacramento.

“Tonight we’re listening to public comments on the draft regulations that we have put out,” said Venturino. “The listening period ends on January 14th at 5:00pm and you can submit written comments by fax or by email and you can find out that information on our website at www.conservation.ca.gov.”

Cesar Campos, 24, is with the Central California Environmental Justice Network, an organization that tracks environmental issues across the valley.

“Fracking pollutes the air and water, which for those of us in the valley, it affects us most because we’re already the most polluted cities in the nation,” said Campos. “This pollution affects our lives because of the air we breathe and the water we drink.”

But one part of the problem for rural communities, and especially farm worker communities, is language accessibility.

Saucedo does not speak English. Her testimony at the hearing was translated by a translator, but the proceedings themselves were not translated for the audience.

“How can you have translators for yourselves but not provide a translator for people in the audience,” said Saucedo in her public comment. “This alienates the people who are most affected, it keeps us from participating in the proceedings and to me, this is a form of racism.”

In an interview with South Kern Sol, Saucedo reiterated the need for translation services to make the public hearings truly participatory and democratic.

“There’s just no way we can get everyone involved if these events are set up to deliberately exclude us,” said Saucedo. “It’s easy for these companies to come in and get their word in and tell us about how safe fracking is, but for us who have already been affected personally by the effects of pollution, we can’t participate, we’re shut out.”

The hearing also drew supporters of fracking, who say local residents will benefit from jobs.

Campos, the activist with the Central California Environmental Justice Network, says he believes the state should put a moratorium on fracking until independent research can be conducted on the long-term effects of the technique. Dozens of local communities in California are calling for a fracking moratorium, with some passing local bans.

Rather than rely on fracking to get more oil, Campos says, the state should look to renewable energy.

“Wind and solar are viable alternatives that we can draw energy from, and the kinds of jobs that they can create, are far better and less costly to our environment than fracking,” said Campos. “Ultimately, our water and our air aren’t worth the sacrifice.”