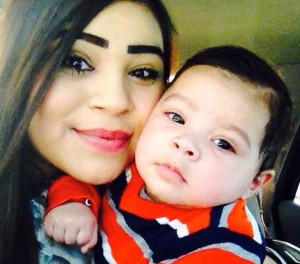 Learning that you’re pregnant can be a wonderful surprise for a woman in love. But for some teen moms, their newfound motherhood has become an unforeseen hardship, especially when trying to play the roles of both mom and dad at home.

South Kern Sol interviewed three Latina teen moms from Arvin, an impoverished rural town in southeast Kern County, and discovered that it was their parents that made the difference between whether or not they flourished with the extra responsibility of a child.

Latina teens from Kern County currently have the highest pregnancy rate in the state with 79 out of every 1,000 teen Latinas giving birth every year, compared to a state rate of 45 for every 1,000 Latinas.

“The teen birth rates continue to be high because of the lack of information and high poverty rates along with cultural beliefs that do not stigmatize teen pregnancy among the more recently arrived immigrant populations,” says Bill Phelps, Chief of Programs for Clinica Sierra Vista. “We have reduced our teen birth rate substantially over the past two decades but more work is needed.

In a town where nearly 4 out of every 10 residents live below the poverty the level, the below profiles show three young Latina women from Arvin that have recently decided to become parents.

Jovi Torres, a student at Arvin High School, is a 16-year-old mother of a soon to be 1-year-old daughter. Torres said that before she was 15 years old, she had no interest in dating boys, let alone becoming sexually active.

“My mind was completely opposite from having boyfriends and I thought sex wasn’t needed,” she said.

But when Torres fell in love with her boyfriend, everything changed. Wishing she had had someone to take her to get birth control at the time, Torres says she was taken aback when she realized she was pregnant.

“I just never thought I would be the next teen who got pregnant,” says Torres. “I was sad and disappointed.”

Torres is now raising her daughter without help from the father; the boyfriend that she fell in love with is currently incarcerated. But, Torres isn’t doing this alone.

“My mom is the only one around, and she helps me in a couple of ways, like babysitting when I’m at school,” says Torres.

Torres is able to continue her high school education with the help of her mother, but money problems have put a strain on the relationship.

Nevertheless, since Torres became a mother, she has become more settled, mature, and selfless.

“It’s changed my life tremendously. It’s hard to feel like a teenager again, when you look at that little face in front of your face that is yours, that you’re accountable for besides yourself.”

When asked about her plans for the future, Torres said, “My goals for the future is just to have a stable home, job and provide my daughter with everything she needs.”

Torres plans to go to college and would like to study early childhood development, or a similar subject.

Things have been quite different for Cristina Duran, a 17-year-old mother, who graduated early from Arvin High School and is now attending Cal State, Bakersfield.

“I’m pursuing a higher education for the benefit of myself but especially for my son. I want to give to the community after my goals are accomplished,” says Duran. “I want to inspire young teen moms that even now we have a greater responsibility and encountering more hurdles than others. We’re just going to have to try harder.”

Duran, who plans to pursue a Masters and then a Ph.D in Business Administration, says it was her parents who helped her continue her education. Her parents, she says, have been vital for her success as a teen parent.

“They give me a home for my son and I to stay in, and they assist with childcare when I’m either at school or at work,” said Duran. “My parents help me because they know I am trying my hardest to be a good mom.”

Duran’s parents migrated to the US from Guanajuato, Mexico in 1986. They have been married for 26 years. Helping each other and discussing difficult subjects openly are two reasons why Duran calls her relationship to her parents “beyond joyful.”

But despite the strong family ties, when Duran found out she was pregnant when she went to get birth control pills, she didn’t know how to tell her parents she planned on having a child at 16.

“Well my first reaction was really afraid. All I thought about was how am I suppose to tell my parents,” said Duran, who ended up miscarrying. “I was happy at the same time too; I knew it would change my life for the better because I knew reality would hit me soon,” said Duran.

Duran, who later gave birth to a healthy son, said that her decision to become a young mother may have been influenced by her older family members, most of whom got married at a young age.

“Well coming from a Hispanic background and knowing most of my older generation got married at such a young age played a role in those decisions.”

Like Duran, the father of Duran’s son is also receiving support from his parents.

“The father of my baby is currently incarcerated, but we still are in a relationship,” said Duran. “He can’t be in his life due to the location he is at, but his family is involved nonetheless,” said Duran.

Ana Banda, a 17-year-old senior, was attending Arvin High School when she found out she was pregnant. To provide the best home for her new child, Banda moved to Minnesota to live with her father and her stepmother. She now is raising her 1-year-old son on the wages she earns at McDonald’s.

“I’m playing both roles as a mother and a father,” says Banda who had to leave her son’s father behind in California when she moved to Minnesota. “[But] I give my kid the loving care special bond he needs and I work to provide for him and I play ball with him.”

South Kern Sol asked Banda if she ever thought she would get pregnant as a teen.

“Well I thought about it. But not like ‘oh I want to get pregnant.’ But in a way like ‘what if it happened to me,’ you know? But I would have never thought I would be a teen mom,” says Banda.

Banda says that when she was younger, she became sexually active without using birth control, but it wasn’t for a lack of sexual education.

“It was a kind of an in the moment type of thing. Everyone has sex sooner or later,” said Banda.

Despite her newfound motherhood, Banda plans to continue her education.

“My goals for the future are to graduate and go to college just like any other student. It really upsets me that people think that just because teen girls are having babies it is going to stop them from an education,” says Banda.

She has already been accepted to a few colleges.