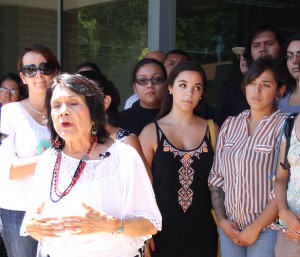 BAKERSFIELD, Calif. — Local advocacy groups held a press conference in front of the offices of the Kern County Superintendent of Schools on July 8, urging the superintendent to reject the Kern High School District’s proposed budget, which they say does not follow the Local Control Funding Formula (or LCFF) regulations.

Dolores Huerta, speaking at the press conference for the Dolores Huerta Foundation, noted that the budget submitted by the Kern High School District (KHSD) allocates LCFF money evenly across campuses, even though the aim of LCFF is to allocate more funds to students with higher need.

“We find that the budget goes against all the requirements and regulations that LCFF funding is for… they’re allocating the additional money, 17 million dollars, across all schools, even to those that don’t qualify for the additional funds,” said Huerta. “They’re also using the money for administrative raises, for more police, instead of more teachers, counselors, for restorative justice.”

Erika Brooks, the educational director for the Dolores Huerta Foundation, voiced her concerns about the LCAP.

“We’ve participated in every single meeting with district officials to draw the LCAP. It seems to us that the plan is to not address those issues [of high needs students], and we want the county to send the budget back.”

California Rural Legal Assistance (CRLA), another of the groups present, stated that despite it being required by law, KHSD did not include the opinions of the community members who spoke at the LCAP planning meetings.

“While the LCAP loosely lists some commonly identified goals of [at-risk] groups, it fails to delineate specific changes made as a result of each engagement process,” CRLA wrote in a press release. “The District’s failure to properly list impacts of its engagement process indicates that stakeholder and community input perhaps was not meaningfully considered.”

Parents say that they do not see their input reflected in the LCAP, despite having gone to the KHSD meetings.

“We’ve been to meetings and expressed our concerns but they haven’t taken our concerns,” said Leticia Prado, a parent who attended the press conference. “They’re ignoring us and they forget who makes the schools, the parents.”

Steve Sanders, chief of staff to the superintendent, told South Kern Sol that their office is currently reviewing the LCAP.

If the superintendent rejects their budget proposal, KHSD will have to resubmit by mid-August.