From South Kern to Sacramento, for an Enriching BMOC Event 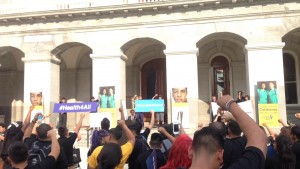 In a recent youth of color mobilization to the State Capitol, I was alone in representing Kern. With the historically high suspension and expulsion rates at Kern High School on my mind, I was ready to join my fellow youth advocates in pushing for a better way to deal with discipline in schools across the state.

From August 4 through August 7, the Alliance of Boys and Men of Color brought 200 youth together at the State Capitol in Sacramento to discuss school discipline, and affordable health care for undocumented Californians with state lawmakers.

We started our summit at Sacramento State University. As we arrived at the campus, I noticed that the youth, some as young as 14, seemed a bit nervous to be stepping into a large college campus. So, instead of jumping head first into a deep pool of politics, we talked with each other about what we were doing to improve our neighborhoods.

Later, I attended a workshop about gender justice and equality. To my surprise, the people at this workshop welcomed me with open arms. I realized that gender justice is not just a woman’s issue; it’s a men’s issue as well. I realized that gender stereotypes are holding down both women and men. I walked out of that room more accepting of all people.

Later that day I joined the Fresno group to discuss issues in the Central Valley and together we prepared for our 15-minute meetings with legislators scheduled for the following day. Because our meetings were to be only 15 minutes long, we could only choose three issues to discuss with our legislator. Knowing the historically high suspension rates and expulsion rates at Kern High School, I advocated that youth justice be one of the three topics we would present to our lawmakers. After two and a half hours of discussion we finally came to the resolution that the three areas of interest we wanted to discuss with lawmakers were:

Education: Ensuring that students are given more access to college courses while in high school and more job training opportunities.

Healthcare: Expanding affordable healthcare to all individuals no matter what social class or documentation status.

Youth Justice: Ensuring that less students get suspended or expelled for unnecessary reasons and giving students more access to counselors to resolve their issues.

The next morning was our big day.

All 200 youth and their mentors piled into buses and were taken to the Capitol. When we arrived we saw our magnificent State Capitol, with its huge white dome and elegant Greco-Roman designs. The sun was beaming brightly over the dome and shined directly on the state seal illuminating its golden color and showing the state motto, “Eureka”. As we walked up the steps of the Capitol the breeze picked up and our state’s flag was waving gallantly with its large brown bear, green grass and unforgettable words “California Republic”. It was almost as a symbol that as us, the youth, walked up the steps of our state’s capitol to speak with our representatives about the issues in our communities, we were the protectors of our republic. Though we were young and some of us not even old enough to vote, we were participating in a democratic system of governance that has been around for centuries. And insodoing, we were ensuring its survival with the next generation.

We entered through security and walked the hallowed halls of the Capitol seeing all the rich history of our state. It was show time. We arrived at Republican Assemblymember Shannon Grove’s office for our first of four legislative meetings. We spoke with her chief of staff because she was not in the office that day. At first it was quite nerve-wrecking. We started with introducing ourselves and why we were here and then we talked about the first issue, education. I thought myself, “Surely this busy man will not pay attention to what we are talking about.” But I saw the complete opposite. He actually did listen and cared about what we were saying. He even said he agreed with some of our points we were saying!

By the time the first meeting was complete we felt a sense of relief as we realized that it was not as bad as we thought it would be. The next two visits with Assemblymember Perea of Fresno and Assemblymember Salas of Bakersfield were easy, especially since they themselves were men of color and big supporters of our cause. They ensured us that anything that came to their desks from us would have their stamp of approval and full support.

Then, at the end of the day came the final and hardest legislative meeting. We would be meeting with Republican State Senator Vidak of Kern and Fresno counties, who represented a far greater number of constituents. We entered his office, knowing that he was considered the “tough guy” of the Senate who rarely worked across the aisle. When we sat down on his big plush sofa and started talking, we saw that we weren’t talking to a big tough politician. Mr. Vidak was actually very interested in what we had to say and even said he would support us in some of our issues. We talked to him about expanding job training courses in school and allowing for students to have concurrent enrollment in college while still in high school and he agreed and said he would try to get more done about it.

Then we discussed the hard issue of expanding medical coverage to low income individuals and undocumented workers, and he agreed for the most part that we must expand coverage, but first find the funds to do so. Then, for our last issue of youth justice and ensuring that students are kicked out of school for minor offenses, he agreed with our solution of getting more counselors and mediators for students in order to assist students with their problems and stop them before they get worse.

It was nice to sit down and work issues out with our Republican representatives about Democratic ideas!

We ended off the event with a huge rally on the steps of the Capitol later that week. We chanted, danced, laughed, and cried. But more importantly, we promised each other that we would not stop until we have made the difference we are seeking in our communities.

Though we are only kids, we knew that the only way to fix our world is for us to stand up and do something.

We will no longer accept the youth of color to be forgotten.

In those short few days I attended the event I made friendships that will last a lifetime. I am so proud I got to attend such an important event and I am confident that our work does not end here.