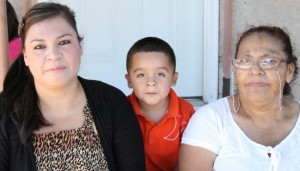 Pictured above: Alicia Rodriguez (left) with her son and mother.

BAKERSFIELD, Calif. — The past two harvest seasons in Kern have been unlike the others. Instead of sharing a bountiful harvest with loved ones, families are spending their weekday nights in their cars, waiting in line up to receive a box of donated food.

The problem is the drought. Just like with last year’s drought, residents are again seeing a smaller crop yield, fewer agricultural jobs, and an increase in food prices. Now, Kern residents like Alicia Rodriguez, a mother of three, say that the drought is impacting their ability to buy groceries.

Luckily for Rodriguez, Community Action Partnership of Kern County (CAPK) has teamed up with the state’s Drought Food Assistance Program (DFAP), to bring relief to those affected by the drought. The program, which was created in response to last year’s drought, is continuing to serve impacted families as the drought persists.

A recently released USDA report found that while prices for fruits and vegetables on average fell nationwide in July, prices are expected to increase five to six percent for the entire year. Locally, the forecast for the crop supply looks grim.

“I’ve seen farmers have to uproot entire orange orchards because there just isn’t enough water for all of them, and that means less jobs,” said Rodriguez.

The drought has a ripple effect on the local economy. It begins with fewer jobs for farmworkers, and then later affects other workers down the supply chain.

“That drought affected not just farmworkers but also others, like truck drivers. It was a domino effect,” said Yazid Alawgarey, Agency Relations Tech for CAPK. He said CAPK is dispensing food to families five to six times a week across the county, and is dispensing 600 to 1200 boxes of food from the United States Department of Agriculture per evening. According to CAPK, 21 percent of Kern families are “food insecure”, meaning they are without consistent access to adequate food due to a lack of funds and other resources at times during the year.

Because of the population served, the process to “qualify” for assistance is nearly instant, and only requires residents to simply appear in person.

“For people to get food from us, we don’t require ID in case they are undocumented. The state just requires your address and household number and we give them their food,” explained Alawgarey, who noted that the typical pattern of food need was different from other years.

“We do usually notice a dip in food assistance need during the summers when work season begins through December, but this year there wasn’t really a dip, need has been consistent throughout the year,” said Alawgarey.

“Anyone in the area with need just comes by, signs off that they received a box, and they receive a box,” said Jimenez. “Most people in Lamont are those who live [off work in] the fields, so they’ve all been affected somehow by the droughts.”

Jimenez herself has experienced the effect that the drought has had on prices and on the price of water itself.

“Water prices are going up, prices in general are going up, and I myself don’t work in the fields, but I know it’s getting really hard for everybody,” said Jimenez. “Unfortunately I don’t think it’ll get better, it’s going to get harder.”

As the drought drags on, Jimenez said people must let go of cultural apprehensions toward receiving help.

“There are people out there who don’t want to come and get assistance out of pride,” said Jimenez. “I’ve been there, done it, but don’t let that stop you. Please come by.”

Future relief will be dispensed for South Kern in Lamont on September 13th from 9 to 11 a.m. at Lamont Pentecostal Church of God on 9901 Velma Street.