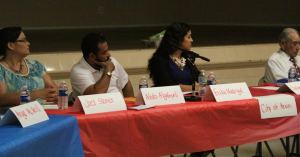 ARVIN, Calif. — Lifetime Arvin resident Larry Horton wants more places to shop. The 23-year-old, like many in the city, travels at least a half hour to Bakersfield any time he needs to purchase basic household items.

“We need more than just 99 Cent stores and auto part stores,” said Horton. “For a town that’s growing as fast as they say Arvin is growing, I want to see progress and development, not more of the same,” said Horton.

On Oct. 8, Horton attended a forum hosted by the Dolores Huerta Foundation at Arvin Veteran’s Hall where candidates for Arvin City Council, Arvin City School District, among others took center stage. There, Horton was happy to find that most of the candidates not only agreed with him, but also planned to bring business to the city.

The loudest applause of the night came after a philippic against Arvin’s high business costs from city council candidate Abdo Algabyali. Algabyali, a business owner, said the high costs were the reason that businesses like Jack in the Box and Rite-Aid were in nearby Lamont where fees are lower and regulations are scarce.

“Yes, I agree we should lower fees to attract businesses, but some of these fees, like the traffic impact report and fee, go directly to ensuring Arvin’s safety, while some fees are mandated by the state and we can’t do anything about,” said Robles. “We should reduce fees where we can but not at the cost of our safety.”

Candidates for Arvin’s school district also fielded questions for the community. Parents in attendance said they were concerned with a lack of nutrition in school lunches.

School board candidates responded by saying that these concerns were beyond the reach of local board members, a response that Horton, an employee for Arvin School District agreed with.

Instead, Geri Rivera, one of the candidates for the school board, said the school lunch issue could be resolved with more parent involvement in school decision making.

“I’ve often seen meetings aimed at involving parents being held at 1:30 in the afternoon, but for working families, this just can’t happen,” said Rivera. “We have to make it so parents can get involved.”

In attracting businesses and improving parent involving in schools, one theme of the night was restoring a sense of community and community pride, a theme discussed not just by candidates but by voters. Jaime Garcia, a 22 year-old resident, wants her city to be safer and cleaner.

“I want kids to be able to walk around by themselves and I want the city to be a good environment,” said Garcia. “My impression of the candidates is that that’s what they want to work for.”

Garcia specified one campaign goal that resonated with her.

“For them to build a [satellite campus of Bakersfield] college, that would really help a lot of people,” said Garcia. “I know I struggled a lot when I had to travel all the way to Bakersfield to go to school.”

City council candidate Erika Madrigal tied together the importance of a satellite campus of Bakersfield College with the need to promote business development in Arvin.

“Businesses will come if they know they are going to have customers,” said Madrigal. “A college campus in Arvin would provide businesses with customers and a reason to set up in Arvin.”

As for Arvin citizens, Garcia, like Horton, is optimistic about the future of Arvin and its crop of potential leaders.

“For the future, I think Arvin will get better, it’ll be safer, it can be fixed up and improved, I’m positive,” said Garcia. “I want everyone to support Arvin and help make it better.”