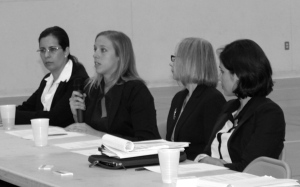 BAKERSFIELD — Shortly after the September 11 attacks, Kern county resident Lori De Leon’s son was sent home from school on suspension. The offense? Not tucking in his shirt.

School administrators, she said, thought her son could have been hiding weapons. De Leon also alleges that her son was labeled a “problem child,”  a characterization that contributed to him being suspended multiple times throughout his high school career.

De Leon is just one of the many Kern County parents that are suing Kern High School District, along with local organizations like California Rural Legal Assistance, for racially biased school discipline practices that have created what they describe as a “school to prison pipeline.”

The suit, dated October 9, claims that the district’s policies result in too many suspensions and expulsions, punishments that disproportionately impact Latino and African American students.

Plaintiffs say the district’s disproportionate expulsion and suspension rates are the result of “intentional discrimination, implicit bias, implicit associations, stereotype threat, racial anxiety, the effects of in-group preferences, and the use of negative stereotypes.”

Not only are the punishments racially disproportionate, advocates say, but the numbers are also much higher than other counties in the state. In the 2009-’10 school year, the district expelled 2,205 students, the highest actual number of expulsions in any county in the state — even higher than larger districts with more students.

Though the district claimed to have experienced a dramatic reduction in expulsion rates in the years following 2009-10, racial disparities nonetheless persisted.

“Students at these alternative schools have far fewer academic and extracurricular activities, are less likely to be taught by a qualified or highly-qualified teacher, and have limited access to the courses necessary to enroll in California universities,” the suit says. “As a result, these students also have disproportionately higher drop out rates and lower graduation rates.”

De Leon says that for the past three years, she and other parents met to help draft the district’s budget plan and to propose alternative disciplinary measures to the district. The aim was to cut off the district’s “school-to-prison” pipeline.

“We wanted to develop alternatives to the school to prison pipeline and introduce proven alternatives, but they’ve been ignoring these possibilities,” said De Leon. “They’re not doing their job, which is to get children to graduate and prepare them for higher education.”

She said that even without expulsions, students are already being prepared for what she calls a militarized mindset. Three days before the lawsuit, the Bakersfield Californian reported that the district had received ammunition for its arsenal: 25 AR-15 semi-automatic rifles, plus 30 magazine pouches for M4 assault rifles.

“It speaks to its militarization of the schools and instills a mindset of getting kids ready for prison,” she said. “They’re wasting taxpayer money.”