Kern, Too, Is Feeling the Impact of Ferguson 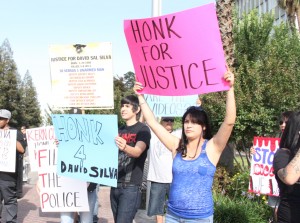 BAKERSFIELD — In comparison to the street protests erupting on city streets across the nation, Bakersfield’s response to the recent events in Ferguson and New York looks tame. But that doesn’t mean the national conversation about police accountability isn’t resonating with residents and even law enforcement officials in south Kern County.

Several weeks after a grand jury decided to not indict police officer Darren Wilson in the shooting of an unarmed 18-year-old black man, Michael Brown, Bakersfield NAACP President Patrick Jackson said that a number of Kern County residents have contacted his office to express their support for the civil rights demonstrations, and to advocate for changes to local law enforcement policy.

“When police brutality is on the national news and everyone sees it, and they still get away with it, now it feels like you have no protection,” Jackson said. “We’re trying to channel that energy and uproar into a proactive movement that creates positive change within this community.”

The Brown decision, along with the decision to not indict NYPD officer Daniel Pantaleo in the choking death of Eric Garner, also black, rekindled long simmering frustrations in poor communities and communities of color, where police officers are sometimes viewed as aggressors, rather than protectors.

A nationwide study published by ProPublica found that young black males are 21 times more likely to be fatally shot by police than the rest of the population. After analyzing more than 1,200 deadly police shootings between 2010 and 2012, the report concluded that 31 of every million black youth between the ages 15 and 19 are killed in the United States, compared to a rate of 1.47 per million among whites in the same age group.

Sergeant Joe Grubbs, the Bakersfield Police Department Public Information Officer, said that while his department would prefer to release information about police misconduct to the public, they’re forbidden to do so under the California Peace Officer’s Bill of Rights, a set of laws that give law enforcement officials special legal protections when being accused of a crime.

“The ability to be able to release that information would be helpful for the public, for the officer and for our organization,” Grubbs said. “The Bakersfield Police Department is a transparent organization, and we’re proud of the way we’ve chosen to police this city.”

Shortly after the initial civil unrest in Ferguson this summer, the Bakersfield Police Department opened its doors to local media, inviting the Bakersfield Californian and several television stations to inspect its shooting range, arsenal and assortment of tactical vehicles, Grubbs said. Unlike many law enforcement agencies, BPD has declined the offer to receive surplus military equipment such as fully automatic weapons from the federal government.

“We don’t have grenades, we don’t have grenade launchers or any of the things that would be associated with the militarization of police forces,” Grubbs said. “They are available to us, but we have chosen not to take advantage of that type of equipment because we don’t think it’s necessary for us to police our community.”

The Kern County Sheriff’s Department has elected to receive a military helicopter and other equipment necessary to access remote rural areas along the county’s vast expanse, Grubbs added.

As recently as 2013, the Kern Sheriff’s Department came under scrutiny after the deaths of two Latino men in Bakersfield, David Silva and Ronnie Ledesma, Jr. Both men died after being beaten by sheriff’s deputies.

Advocates for police reform are pushing for agencies across the country to adopt 24-hour body cameras. Many departments have already started wearing the small devices, which are placed over an officer’s badge or a pair of sunglasses and provide a constant video feed of anything that happens while an officer is on duty.

Sgt. Grubbs said that BPD would be open to adopting body cameras, but the funds for the equipment would have to be allocated by the Bakersfield City Council through the city’s municipal fund. The Kern County Sheriff’s Department has an independent budget that can be allocated however it chooses.

“We’re not afraid of body cameras,” Grubbs said. “We have nothing to hide.”

One major complication with body cameras is the extremely high cost of streaming and storing HD video, 24-hours a day, from up to 100 officers on patrol at any given time, Grubbs said. Another problem is balancing out the personal privacy of BPD officers with the need for a 24-hour body camera system to be safe from tampering.

“Does the camera run all the time, even when an officer is using the bathroom or having a personal conversation with a coworker?” Grubbs asked. “On the other hand, for recordings to be reliable, officers can’t be able to shut the cameras off by themselves.”

Jackson and his colleagues at the Bakersfield NAACP feel that body cameras are an important step toward repairing the relationship between law enforcement and the black community, even in situations like the Eric Garner case, where a cellphone camera captured the African-American man’s death from a chokehold by an NYPD officer.

“If the evidence is out there for everyone to see, it makes it an even playing ground for people to investigate the issue on their own,” Jackson said.

Bakersfield NAACP is pushing for an independent community review board to oversee cases of racial misconduct by local law enforcement, as well as an initiative to support a state-appointed prosecutor for officer-involved shootings.

Without the support of other Kern County residents, Jackson said that these reforms to law enforcement policy won’t see the light of day.

“The poor handling of these grand jury decisions have brought to light issues that have been lingering in the black community for quite some time,” Jackson said. “If these issues make you angry and want to riot, we would encourage you to riot at the polls, instead.”