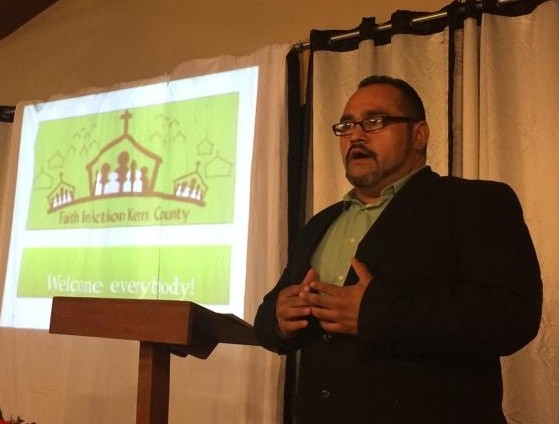 When it comes to the future of communities in Kern County, Joey Williams is optimistic.

As the lead organizer for Faith in Action Kern County (FIAKC), a network of congregations that works to improve the lives of local families, he says that despite the challenges hopeful signs abound.

“It is really the year of Jubilee,” Williams said, citing the Christian belief in a special year of joy and universal pardon. He quotes the Book of Isaiah, which describes “a year when the poor are not going to be oppressed anymore, there will be opportunity. Those who have been locked up will be set free, those who are oppressed will live free.”

His faith wasn’t always in such abundance.

A native of East Bakersfield, Williams says that while growing up he bounced back and forth from one school to another, maintaining a tenuous grip on his education, and his future.

“When I was a teenager … I was up to things that weren’t very savory,” Williams said, in reference to a brief stint in a local gang. He added that tensions at school helped push him down that path. “When I went to Foothill [High School] there were a lot of racial problems.”

His mother eventually transferred him to nearby Highland High School, hoping it might provide better opportunities for her son. Instead, Williams says he walked into a war zone, with students from different neighborhoods belonging to different gangs.

“I saw people around me going to prison … not going anywhere in life,” said Williams.

He says these experiences, combined with a lifelong faith, led him toward a career in community organizing. Williams became a youth pastor in 2007, and describes himself as part of a “rare breed” of “progressive evangelicals.”

FIAKC has campaigned on national issues such as the Affordable Care Act, as well as on state measures like Proposition 30, which increased taxes on the wealthiest Californians to help fund public education.

“We were effective in getting the governor out here in 2012 to speak to about 300 folks we brought out to Bakersfield College in support of Prop 30,” said Williams.

Another measure that Williams and FIAKC threw their weight behind was the Local Control Funding Formula (LCFF), introduced in 2013 as a means of making state funding for public education more equitable. The law apportions monies to districts based on the needs of students enrolled.

Williams, who attended Cal State Bakersfield, where he received his bachelor’s degree in history and a master’s in sociology, sees these and other measures as proof that conditions for youth are improving.

“[In college I was] exposed to AB 540, which offered in-state tuition for undocumented students. Now there’s the California Dream Act, DACA. When I was organizing … none of that existed; it goes to show how far we’ve come.”

Going forward, Williams says his main priorities revolve around helping to keep undocumented families together, and helping to mend relations between the community and law enforcement.

“Right now we have our ‘Live Free’ campaign, which deals with relations between law enforcement and the community,” said Williams. “[This includes] developing accountability for law enforcement, ceasefire programs, [and] safe street partnerships that will reduce violence.”

FIAKC is currently organizing around the Trust Act, which prevents law enforcement from holding persons detained for minor crimes because of their immigration status.

“The department doesn’t always comply sometimes with the Trust Act, and they’ll hold low-level, low-risk individuals for ICE [Immigration and Customs Enforcement],” said Williams. “These are fathers, mothers, workers, people of faith in our community.”

For young people, the impact of seeing a parent deported is devastating, says Williams.

“The psychological effects on a child of having a parent pulled away, deported, it’s lasting, and those are concerns for people of faith,” said Williams.

He adds, the fight for social justice has not changed since the days of scripture. “God is concerned with how we treat the poor, the oppressed, the workers,” he said. It is a Christian imperative, in other words, to be one’s brother’s keeper.