Thousands of Farmworkers in California Can’t Make a Living 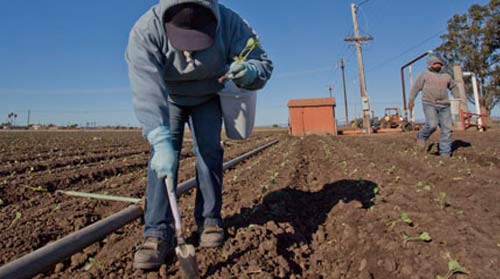 Editor’s note: California farmworkers once made a decent living but according to NAM contributing writer, David Bacon, those days are long gone. Now the majority is struggling to survive. More than a third of the farmworkers population makes less than the minimum wage, while the other third earns the exact minimum. Many suffer from various health issues as the result of years of backbreaking work. Undocumented farm laborers find movement back and forth across the militarized border far more dangerous and expensive than before, and many are stuck even when picking season has ended. In a three parts series, Bacon gives his analysis of the situation and provides two moving portraits of struggling Triqui farmworkers. Bacon’s analysis is below.

At the end of the 1970s California farm workers were the highest-paid in the U.S., with the possible exception of Hawaii’s long-unionized sugar and pineapple workers. Today their economic situation is not much different from that of their coworkers elsewhere around the country. California’s agricultural laborers are trapped in jobs that pay the minimum wage and often less, and are mostly unable to find permanent year-round work.

The decline in income is apparent in three ways. The minimum wage is the current wage standard for most farm workers. They receive a tiny percentage of the retail price of the crops they produce. And their living conditions reflect incomes that are at the bottom of the U.S. wage scale.

In 1979 the United Farm Workers negotiated a contract with Sun World, a large citrus and grape grower. The contract’s bottom wage rate was $5.25 per hour. At the time, the minimum wage was $2.90. If the same ratio existed today, with a state minimum of $9.00, farm workers would be earning the equivalent of $16.30 per hour. At the end of the 70s workers under union contracts in lettuce and wine grapes were earning even more.

In other words, growers potentially were paying an illegal wage to tens of thousands of farm workers. Indigenous workers are the most recent immigrants in the state’s farm labor workforce, and the poorest, but the situation isn’t drastically different for others. The case log of California Rural Legal Assistance is an extensive history of its battles to help workers reclaim illegal, and even unpaid, wages.

To raise wages absolutely, workers need to increase the share of the money paid at the supermarket checkout stand that goes into their paychecks. In recent years the price paid to workers for picking a flat of strawberries, for instance, has hovered around $1.50. Each flat contains eight plastic clamshell boxes, so a worker is paid about 20¢ to fill each one. That same box sells in a supermarket for about $3.00 — the people picking the fruit get about 6% of the price.

According to UC Davis professor Philip Martin, about 28% of what consumers pay goes to the grower. Produce sales from Monterey County alone, one of two counties where strawberries are concentrated, total $4.4 billion.

If the price of a clamshell box increased by 5¢ (a suggestion made by the UFW during the Watsonville strawberry organizing drive of the late 1990s), the wages of the workers would increase by 25%. Most consumers wouldn’t even notice, since the retail price normally fluctuates far more than that. Florida’s Coalition of Immokalee Workers has used this idea to negotiate an increase in the price paid for tomatoes bought by fast food chains, which then goes to the worker in the field.

Low wages in the fields, however, have brutal consequences. When the grape harvest starts in the eastern Coachella Valley, the parking lots of small markets in farm worker towns like Mecca are filled with workers sleeping in their cars. For Rafael Lopez, a farm worker from San Luis, Arizona, living in his van with his grandson, “the owners should provide a place to live since they depend on us to pick their crops. They should provide living quarters, at least something more comfortable than this.”

In northern San Diego County, many strawberry pickers sleep out of doors on hillsides and in ravines. Each year the county sheriff clears out some of their encampments, but by next season workers have found others. Romulo Muñoz Vasquez, living on a San Diego hillside, explains: “There isn’t enough money to pay rent, food, transportation and still have money left to send to Mexico. I figured any spot under a tree would do.”

Compounding the problem of low wages is the lack of work during the winter months. Workers have to save what they can while they have a job, to tide them over. In the strawberry towns of the Salinas Valley, the normal 10% unemployment rate doubles after the harvest ends in November. While some can collect unemployment, the estimated 53% who have no legal immigration status are barred from receiving benefits.

“The fruit that brings growers the most money here is the strawberry crop,” says Oxnard picker Lucrecia Camacho, “but they pay us a wage that barely allows us to live.”