Future ﻿﻿﻿of California’s Economy in Hands of Latinos 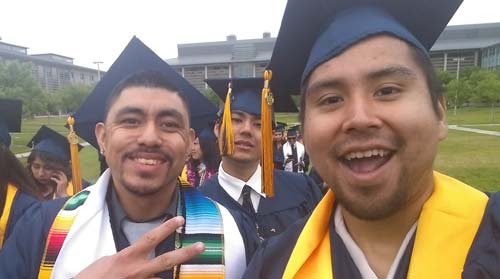 “I feel so proud to be graduating today,” said the first generation Mexican-American student at last month’s Merced College commencement. “This is my biggest achievement.”

Aguirre, 21, graduated with an Associate’s degree in psychology and plans to transfer to California State University, Humboldt, where she will pursue her Bachelor’s degree in social work.

According to the State of Higher Education in California: The Latino Report, released by the advocacy group Campaign for College Opportunity, Aguirre is among a minority of Latinos in California who are managing to thrive in higher education.

The report shows that fewer than two in 10 working Latinos in the state have a college degree. It also found that on average only 45 percent of Latinos enrolled in the Cal State system manage to graduate within six years, compared to 51 percent for non-Latinos. Within the University of California system, the average overall graduation rate is 84 percent, while for Latinos it is only 75 percent.

The report also states that about two thirds of Latino college students (7 out of 10) begin their college career at a community college, with many planning to finish their education elsewhere through a transfer pathway.

Edmundo Zaragoza, 21, became the first in his family to graduate college. He earned a Bachelor’s in history from UC Merced earlier this year. The ceremony capped years of struggle both in school and at home.

Zaragoza attended a charter school in Southern California where he said he felt like he was “just a number.” Without much support, his grades slipped, though he eventually got back on track by putting in extra hours of study and moving straight into UC Merced after high school.

At home, however, Zaragoza says his parents were less than supportive in his transition to college.

“I did not know what I was doing,” said Zaragoza. “No one taught me what to do, they just expected me to know. I felt all alone.”

Zaragoza’s story highlights the challenge many Latino youth encounter when preparing for college.

“Many of us are first generation students,” explained Zaragoza. “Schools often overlook this. They do not understand how hard it is for us.”

A combination of factors make the road from high school to graduation difficult for first generation Latino college students, beginning with the significantly higher chance that a Latino student will attend a low-performing high school in a low income area. In 2013, only three out of four Latinos graduated from high school in four years, and many who do graduate do not demonstrate academic readiness for college-level work.

Despite many of these challenges, Zaragoza remained focused and earned his diploma, an accomplishment he feels belongs to his whole family, not just himself.

Zaragoza said his college experience would have been easier had his family been more informed about the process. That is, in fact, one of the major recommendations of the Campaign for College Opportunity report.

“Research suggests that Latino students and their families have inaccurate perceptions of requirements, do not receive enough or accurate information in a timely manner, or are deterred by the application process altogether,” the report said. As a result, many never complete their Free Application for Federal Student Aid (FAFSA) or apply for a Cal Grant.

“One major issue is that there is not enough material or outreach in the native language of these families.” said Daniel Ruiz, a Financial Aid Student Services Assistant at Merced College. “Because of this, many students are not aware of the various federal programs like the Pell Grant, work study, and direct loans.”

In addition, the transfer pathway program into the CSU and UC systems can often be difficult to navigate for Latinos in community colleges.

Aguirre said she received so little information about transfer options that she turned to her peers for advice, instead of seeking help from counselors.

Undocumented students face even greater challenges. The report estimated that three out of four college age undocumented youth are not enrolled in school, primarily because they cannot afford it, and are largely unable to access financial aid.

Citing the growing Latino population in California, the report concluded, “The future of our economy and state will rise or fall on the educational success of Latinos.”

In Merced County the tide may already be turning. In late May, Merced College held its 52nd annual commencement ceremony, handing out over 1,000 degrees and certificates. A majority went to Latino students.

To read the full report, you can visit the Campaign for College Opportunity here.