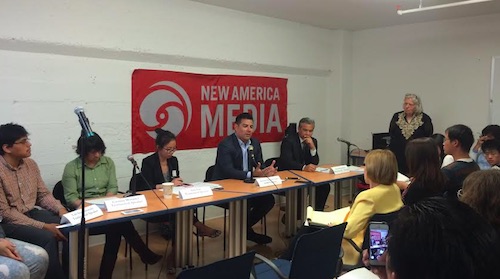 SAN FRANCISCO — Even as health care advocates are celebrating California’s recent “landmark victory” in getting its undocumented children health care, Latino and Asian and Pacific Islander (API) communities should show a united front and make sure that all of the state’s undocumented residents get the same benefit, urged Sen. Ricardo Lara, D-Bell Gardens.

“The API and Latino communities have similar backgrounds and we both believe in giving back to community,” said Lara at an ethnic media briefing hosted by New America Media on July 21, 2015, with his “partner in crime” as he referred to Assemblymember Rob Bonta, D-Oakland, at his side. “We’re fighters. There’s something in our DNA that wants us to go forward.”

Lara’s Health for All bill (SB 4), was originally intended to provide health care to the state’s nearly 2.6 million uninsured residents, regardless of their immigration status. That would have been done either by enrolling them in Medi-Cal, (California’s name for Medicaid, the insurance program for its low-income residents) or by allowing them, after getting a federal waiver, to buy health insurance on Covered California, the state’s health insurance marketplace, with their own money.

Lara’s is optimistic that his other health care coverage bill, SB 10, will close the gap by providing those left uninsured full-scope Medi-Cal benefits if they meet eligibility requirements and if funding is available. If it’s not, they will get limited scope benefits. SB 10, like SB 4, has passed the Senate and is now before an Assembly committee.

Both bills, Lara said, will stand a good chance of passage if the AAPI and Latino communities campaign together.

The health care bills are “about inclusion, collaboration and partnership,” Bonta agreed, as he addressed the packed room of reporters and some health care advocates. For his part, he will inspire all Asian Americans to campaign for the bills, he said.

SB 4 will seek a federal waiver to allow California’s undocumented immigrants to purchase insurance on Covered California, but without providing them subsidies. An estimated 390,000 people will benefit from the waiver, Lara said.

He pointed out that it’s in the state’s financial interest to pass his bill. Without it, undocumented immigrants will continue using hospital emergency rooms even for their basic care, currently costing the state $1.7 billion annually.

Lara said he can understand the plight of undocumented and uninsured immigrants because his Mexico-born parents were at one time in that situation themselves.

Bonta, the co-author of the bill in the Assembly and chair of its health subcommittee, observed that when Lara first introduced his bill last year, the odds were stacked against its passage, especially given that a similar bill the senator introduced the previous year did not get out of committee because of its $1.3 billion annual price tag. This year’s bill would cost a lot less because no state subsidies will be given to those who purchase insurance on Covered California.

Three California undocumented immigrants – two from the API and one from the Hispanic community — shared their own personal stories that brought home the importance of having access to health care.

Amy Lin testified about being undocumented and uninsured.

Amy Lin, who came with her mother to the United States from Taiwan as a 12-year-old, said it was hard for her to watch her 50-something-year-old mother slog as a domestic worker and not have health care.

“She suffered lower back pain and joint pain that became chronic,” Lin, now 23, and a Deferred Action for Childhood Arrivals (DACA) beneficiary said. “She relied on over-the-counter pain relievers. We bonded over the massages I gave her.”

Lara’s bill, she asserted, means a lot to the hundreds of thousands of undocumented immigrants who face a similar situation.

Jesus Castro, 20, who immigrated to the United States with his parents from his native Mexico in 2001, recalled how as a young boy he once dislocated his elbow playing baseball. The curandero his father took him to told Castro a story to distract him as he popped the elbow back in place.

His 44-year-old mother, Christine Marquez, told how she too had to rely on such remedies to treat her frequent nosebleeds and other health issues. She recently quit her job because of a slipped disc.

Twenty-seven-year-old Samoan native Tali Seumanutafa recalled how she went through some 25 surgeries to treat a crippling bone disease. The Shriner’s Hospital paid for her surgeries and hospitalization until she turned 18 and aged out of its charitable care program. When the disease recurred in 2011, she checked in at San Francisco General. She was left with a half a million dollar bill that she has not paid.

“I’m unsure of where me and the bill stand,” Seumanutafa said, noting that she now feels more secure because she has Medi-Cal, thanks to her DACA status.

One of the issues many of the state’s lawmakers are concerned about is whether providing Medi-Cal to the state’s undocumented will give them access to health care given the shortage of doctors in the Medi-Cal network. Asked about this, Lara said that both he and Bonta are working on addressing this issue.

Last month, Bonta was appointed chair of the Public Health and Developmental Services Committee that was set up to convene extraordinary sessions to discuss, among other things, how the state can allocate more money for its Medi-Cal program.

“It’s always good to have the chair of the health committee support your bills,” Lara said, turning toward Bonta with a smile.

Both lawmakers agreed that if California, which Bonta called “the most progressive state in the nation,” succeeded in getting health care for all its residents, the rest of the country would likely follow suit.

“California is coming to a neighborhood near you, whether you like it or not,” Lara said.