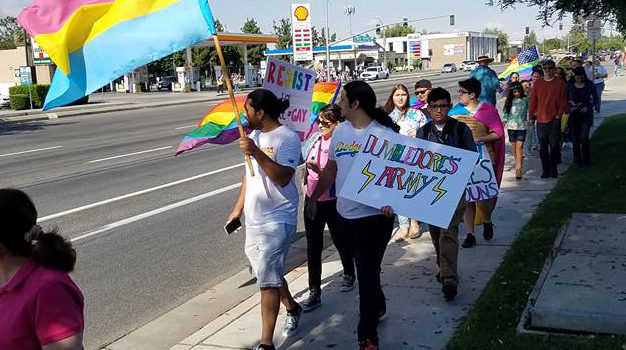 “Out of the Closets and into the streets!” Marchers yelled as they marched in Bakersfield’s first ever Pride March last Sunday.

Joining a nationwide movement, this march was one of many marches that took place across the nation with a demand to advance LGBTQ rights, and resist any unjust policies. This march, sponsored by Bakersfield’s LGBTQ community and the Dolores Huerta Foundation, was also more inclusive; with a demand for healthcare for all regardless of documentation status, and a demand for an end to the Genocide of Gay men in Chechnya, Russia.

Remembering and paying tribute to the victims of the attack at the Pulse Nightclub in Orlando one year ago, protesters spoke about the need to recognize the victims. “You didn’t have to be living in Orlando to have been affected by what happened there,” said organizer Whitney Weddell.

The Pulse Massacre which took place last year was one of the deadliest mass shootings that occurred in U.S. History. 49 victims lost their lives in this hate crime, where the LGBTQ community was targeted at a well known gay nightclub.

“We’re marching in memory of the 49 victims at the Pulse Massacre last summer. It was a tragedy that ripped through our community. The ripple of it will be felt for years…

But we are here to say that we will not be silenced. We will not be the victims of hate, and we will fight LGBTQ violence wherever it occurs” said Dolores Huerta Foundation Organizer Dean Welliver.

In addition to this, marchers also marched for inclusive demands for all LGBTQ people. “Hey hey, ho ho! Homophobia has got to go!” marchers chanted along Stockdale Highway as cars honked their horns in support.  The marchers did not face any counter protesters, and only one marcher said that she heard someone yell “Trump!” from their car.

“By the LGBTQ community coming forward, we normalize it. We make people realize that we are your neighbors, we are your school moms, we are normal people and have families too,” said Brooke Whitehead, a participant in the march.  “And I think it’s really important for the youth to see that there is an “out” community, and it’s okay to be “out” in your school, and say “Hey it’s okay for me to be Gay, Lesbian Bisexual, and to be myself…” Brooke added.

After the march, residents met at the First Congregational Church where local LGBTQ leaders gave speeches and advocated for a more inclusive Bakersfield and Kern County. One local non-binary teen named Emily spoke about their struggles in school. Emily spoke about a time they took a short survey in an English class, when it hit. “I wrote my name, my grade, but my hand did not immediately go to a box marked male or female,” said Emily. Identifying as non-binary has been difficult for Emily, but Emily made it a point to tell their personal story and advocate for others. “Your identity doesn’t correlate with any haircut, any clothes, any accessories, or anything else that you do. You are valid no matter how you express yourself,” Emily said.

Many also signed cards to local legislators to advocate for state legislation in advancement of LGBTQ rights. One of these bills is SB 179, which marchers say is vital for California’s non-binary population. This bill would provide a 3rd option on California birth certificates and driver’s license: Non Binary. This bill would also speed up the process for people to change their gender on such documents. No longer would it require a person to have gone through an official “physical transition” from a doctor,  and the bill would allow the transgender community to more easily obtain documents reflective of their gender identity. According to the Los Angeles Times: “ It would remove the requirement that an individual obtain a sworn statement from a physician certifying medical treatment for gender transition.”As the Pride March came to a close, attendees stood in solidarity after every speech with rousing applause. Before closing, Weddell demanded that people continue to stand together:

“Make a difference. Resist. Do more than march, Stand. Together we rise above our fear, and our oppressors. We change the world for everyone, forever.”

Footage of interviews and coverage of the march can be seen here (possibly embed into article?):