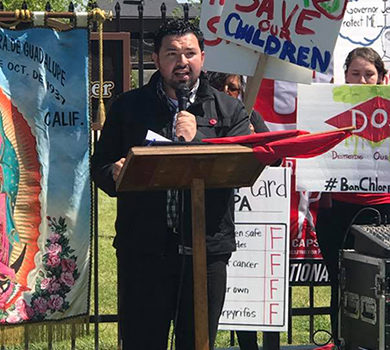 Eriberto Fernandez, 30, remembers working in the fields around Delano as a child.

“You have to recommit yourself every single day because it is hard work that involves a lot of hours. It’s a labor of love. You do this because you know the work is critical,” said Fernandez.

Now Fernandez is the Civic Participation and Policy Organizer for the UFW Foundation, a sister organization to the United Farm Workers. He spends his time working with farmworkers on issues like immigration reform and worker protection.

Worker protection for farmworkers includes heat protection, protection from pesticides, and state legislation to support farmworkers. Fernandez explained that he works closely with decision-makers, the community, and local and national organizations in order to proi farmworkers a safe working environment.

No day is the same for Fernandez. He can work one day in the office and the next be traveling to Sacramento to talk to state legislators.

One of Fernandez’s longtime friends is Anthony Chavez, 31 and grandson of Cesar Chavez.

“One thing that I respected was that he always identified with the role of being a community organizer and just knowing that it really does take all of those very simple yet incredibly difficult, tough and demanding jobs and tasks.”

Chavez explained that he and Fernandez have very intellectual, rhetorical and theoretical conversations about many things. He appreciates Fernandez’s willingness to take the lessons from the conversations they have and find a way to implement the lessons into making himself a better community organizer.

Growing up in Delano, Fernandez was surrounded by the farm working community. Both of his parents are still farmworkers.

Fernandez was out in the fields with his parents from a very young age.

“I can remember going back as far as maybe 10-years-old where I was in the same fields as my parents picking onions,” Fernandez said. “I was there really because my parents could not afford daycare or childcare, and this is true for many farmworker families.”

When Fernandez was younger, his parents were involved in the UFW. The strikes and other UFW causes were a part of their lives.

Growing up surrounded by farmworkers and seeing the impact of the UFW firsthand, he developed a strong opinion on the issues facing farmworkers early on.

Fernandez was recruited as a volunteer at the age of 16. This was the beginning of his organizing career.

His mentors at work taught him how to become a great organizer and how he could impact many people with his work.

Fernandez explained that his work can directly impact thousands of people through change in policies, laws, systems and attitudes.

Currently, Fernandez is working on Senate Bill 54. He explained that the bill “asks the state of California and its employees not to use resources in a way that would help fuel mass deportation.”

“My work, right now, involves basically having conversations with community members and with local elected officials to try to make sure that they are supporting this legislation,” Fernandez said.

Fernandez was involved in getting 400 farmworkers the highest wages in the country for the tomato hardest industry.

“That’s something I’m really really proud of because it’s an example of how unions have the ability to improve workers lives,” said Fernandez.

Working in the industry that Fernandez works in opens up opportunity for growth in his work.