Dolores Huerta and her children speak about the family legacy

A packed Levan Center at Bakersfield College celebrated Dolores Huerta and her children as they spoke about her life as an activist and their family legacy. 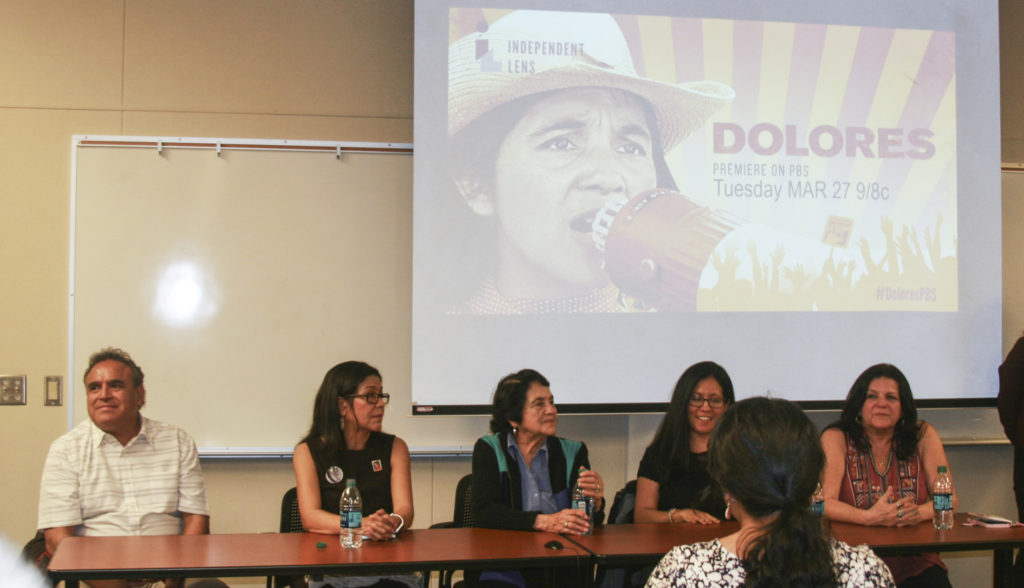 Huerta dedicated her life to civil service and social justice. Her advocacy began in the 60’s when she joined Cesar Chavez in creating the National Farm workers Association. She has worked alongside key political figures such as Robert Kennedy and Barack Obama. In 2002 Huerta created her own foundation that has continued to advocate in social justice issues.

In a panel discussion March 12, Huerta answered questions about her life in honor of Women’s History Month. Huerta’s children, however, have also committed their lives to advocacy and social justice, following in their mother’s footsteps.

“She taught us to have a purpose in life,” said Dolores’ son, Emilio Huerta, a Bakersfield attorney. Emilio has twice challenged Rep. David Valadao, R-Hanford, for his Congressional seat. He lost in 2016, and recently withdrew from the 2018 race.

Emilio said that he does not intend to pursue politics  and would rather focus on other ways to improve the community. He is working toward creating his own organization to support future potential candidates who lack the resources to fund a successful campaign.

“If you don’t have the resources to really launch a campaign, then you will never have representatives that reflect our values and the values of our communities,” Emilio said.

Dolores’ daughter, Camila Chávez, is the executive director of the Dolores Huerta Foundation. She spoke about growing up in La Paz, going to rallies on weekends and how her childhood influenced her decision to pursue social justice.

“We all lived in mobile homes and trailers. We all lived very poor, but we had such a rich community and that was a very different experience than most people have. So that was just a big blessing and as a child I didn’t realize what it was, that work, until we were older,” Camila said.

Camila said that once she left Kern County as a young adult, she never thought she would come back. But after years of working in the public health system, she felt that serious changes needed to be made and that her mother would be the perfect person to help her.

“I thought, ‘Well what would Dolores do?’ and so I started talking to my mom and saying, ‘I want to learn from you. How did you change laws? How does policy work?” Camila said.

Camila continued to follow in her mother’s footsteps. When her mother created the Dolores Huerta Foundation, Camila had already been looking for ways to address the issues of the public health system, so she accepted the position of executive director for the foundation. Since she started, Camila has established 40 grassroots community organizations that work on community projects, youth leadership programs, led a campaign in 2005 to increase wages for farm workers, and helped to defeat an anti-immigrant resolution proposed in the Bakersfield City Council in Sept. 2007.

“She always encouraged us to follow our dreams. She didn’t say you have to be organizers. So my brother, he’s a rapper, she encourages him. She would say well let me hear your raps,” Camila said regarding her mother’s encouragement of their family no matter what.

The family also discussed various political ideals they support, including  The California Schools and Local Communities Funding Act of 2018. This draft initiative, filed by several nonprofits in California, would restore $11 billion in annual revenue to schools and communities by closing a loophole that allows large commercial owners to avoid paying certain property taxes.

Advocates of  the initiative say it would amend California’s Proposition 13 corporate loophole without affecting the property taxes for homeowners, renters or small businesses. It would also mandate full transparency for all revenue to California schools and local communities.

“It’s not enough just to give us your signature. You’re really going to have to go out and talk to your friends and your families and educate your communities,” said Juanita Chavez, another daughter of Dolores. “The corporations, the big money — they’re not going to like having to pay their fair share of taxes.”