Kern County held its first TRUTH Act forum Tuesday at the Board of Supervisors meeting to discuss the involvement between the Kern County Sheriff Office and Immigration and Customs Enforcement.

A public forum is a requirement of the California Transparent Review of Unjust Transfers and Holds (TRUTH) Act, passed into law in September of 2016. The law provides vital “know your rights” information to immigrants who are in ICE custody and brings transparency to local law enforcement participations in federal immigration enforcement. It also requires local law enforcement to provide a written consent form to explain the purpose of the interview, that it is voluntary and that the individual may decline the interview.

The law also ensures that if local law enforcement agencies provide ICE with notifications of an individual’s release date and time, then the agency must also provide the same notification to the individual in custody and their attorney, according to the bill. The law requires local police agencies to collect information and data when ICE requests transfer holds and interviews with individuals in custody.

The forum began with the presentation of data from KCSO representative Chief Deputy Tyson Davis.

In 2017, ICE made 622 requests to be notified of the release of detainees from Kern County detention facilities, according to KCSO’s presentation. Of those requests, ICE arrested 486 individuals upon their release from Sheriff’s Office custody.

“Kern County has consistently been one of the top counties in the country where ICE enforcement has gone up,” Lopez told South Kern Sol.

The department also said it cooperates “with ICE within the law to protect public safety.” 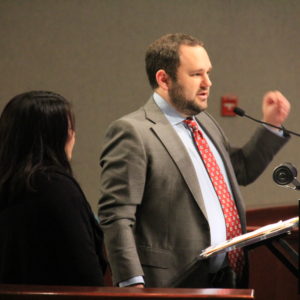 Jordan Wells, a staff attorney with the ACLU, spoke at the TRUTH Act forum held Tuesday.
BY BRYANA LOZOYA

Jordan Wells, a staff attorney at Bakersfield’s new ACLU office, said this is an important issue for the community to address.

“We need to recognise Kern is a diverse Community,” he said. “(Hispanics) play a vital role in our labor market and our economy.”

More than 50 percent of Kern’s population identify as Hispanic or Latino, according to the ACLU. One-fifth of those individuals are foreign-born and approximately 75,000 are undocumented.

“I think the more questions you ask, the more information will be driven out,” Wells said. “We want to know, how are they implementing (the law)?”

During the ACLU presentation, Wells commented on the absence of Sheriff Donny Youngblood.

“We really want to encourage Sheriff Youngblood to actually attend these forums,” he said. “We would like him to be right here to hear from people about the preliminary issues.”

Wells wasn’t the only one to take note of Youngblood’s absence. During the public comment period, a number of community members expressed anger and disappointment in Youngblood missing the forum. 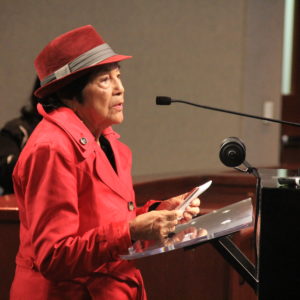 During the public comment period, Dolores Huerta asked the board to see the public’s commentary as a reflection of the policies and philosophies of the board members.

Jose Bello, a local undocumented resident who was arrested by ICE early this year and detained at Mesa Verde detention facility, also spoke of his “poor” experience with ICE agents.

“I would hate for anyone to be in that situation,” Bello said.

Ambar Tovar, a staff attorney for the United Farm Workers Foundation, told the Board of Supervisors that many of her clients, some of whom have been deported, weren’t told about their rights when arrested and detained.

“We need to hold the sheriff’s office accountable to ensure Kern County is not in violation of this law,” she said.

“It’s a little upsetting they weren’t as clear or didn’t have a chance to answer any questions or concerns raised by public,” Lopez. “But what I did appreciate, it seemed like the supervisors were more willing to listen.”

Bryana Lozoya is a youth reporter for South Kern Sol. Lozoya is student at Bakersfield College and writes for The Renegade Rip.