The marchers, varying in race, age, sexual orientation and gender identity, made their voices heard as they chanted phrases, such as, “My body, my choice!” and “Si, se puede!” and “This is what democracy looks like!”

Thousands showed up in support of a myriad of issues and policies.

“We are faced with so many issues that supersede us being women. We are faced with issues even within the feminist community,” said speaker Faheemah Salahud-Din, who almost didn’t speak at the march because she, “was not interested in being the token black face in the space where my issues were not represented.” 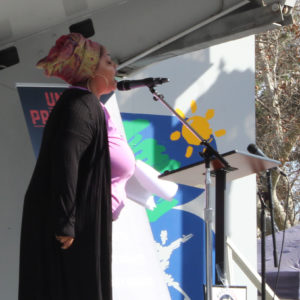 Faheemah Salahud-Din speaks out about racial disparities in both Bakersfield and the feminism community.
PHOTO BY LIZETTE CHAVEZ

“White mainstream feminism has never included women of color,” she continued in her speech. “As a result of that, we are often the backs that are stood upon while white women fight for their rights at the sacrifice of ours.”

“Bakersfield is a place where women of color don’t have a voice, much less a seat at the table, so we have to fight, not just the patriarchy, but sometimes even the white women who claim to be our allies.”

Some speakers shared poems and sang songs, while others spoke about rights for the disabled, immigration rights and environmental rights, and how these issues specifically affect women.

Korina Gallardo spoke out about the lack of safe drinking water, specifically for Californians living in poverty.

“Over one million Californians do not have access to safe or affordable drinking water,” Gallardo said. “We know that marginalized communities are the most impacted and vulnerable because they don’t have safe drinking water, specifically people of color. Women of color are having to live under these conditions daily.”

Those who didn’t speak in front of the crowd still showed up to raise awareness to issues that affect women that are important to them.

Eli Swanson, 15, attended the event to support not just the end of harassment against women but transgender women in particular.

“I think that women should have the right not to be harassed,” Swanson said. “(I’m) definitely for trans women’s rights. They don’t really get accepted very much. I don’t think that’s right.” 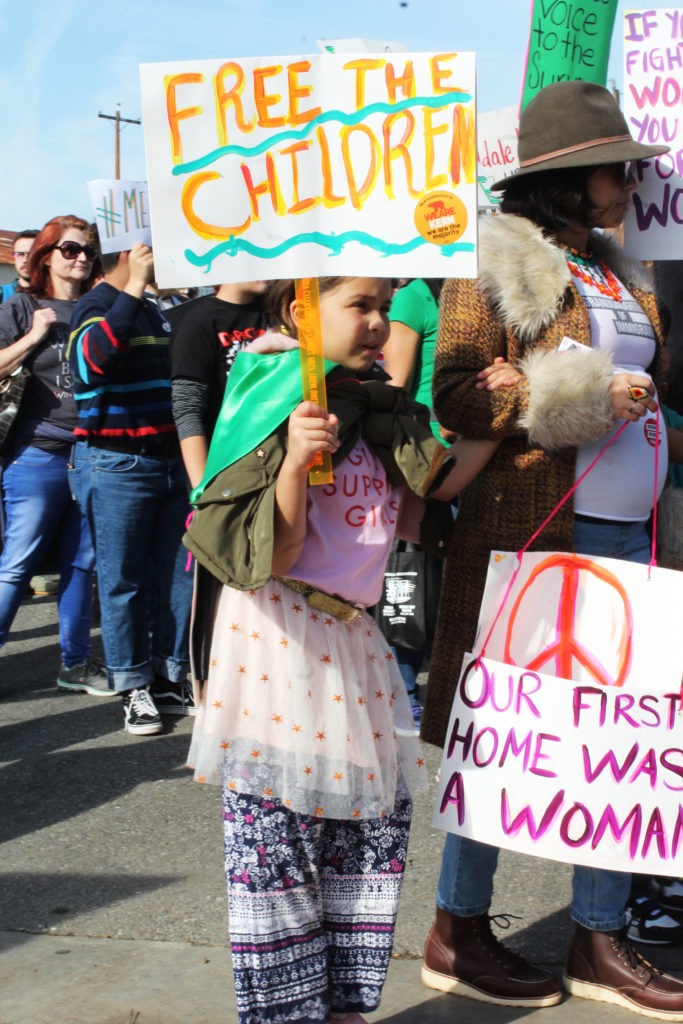 A young girl marches holding a sign calling for the release of children at the border at Kern’s third annual Women’s March. PHOTO BY LIZETTE CHAVEZ

“The hatred is unfounded, in my opinion, toward immigrants, particularly undocumented immigrants,” he said. “I think that the solution to most of these problems is just better education.”

As the march took place, people in their homes, cafés and shops came out to watch, some shouting words of encouragement.

Police officers were present, offering smiles and nods to the marchers.

Some workers helping with traffic could be heard chanting, “Women’s rights are humans’ rights.”

This story was made possible with a grant from California Humanities, in partnership with the Bakersfield College Foundation and the Virginia Alfred Harrell Foundation.