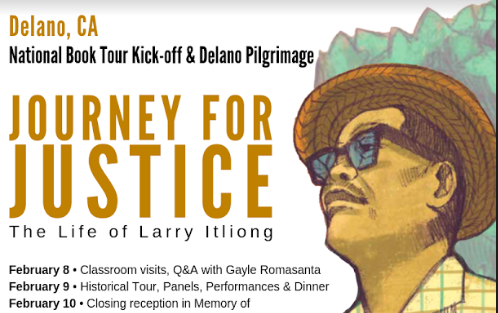 2-5 p.m.
– Screening of Delano Manongs
– Ceremonial book giving to Itliong Family, City of Delano, and Delano Union School
District
– Student reading
– Panel discussions: “The importance of history: Learning from the progress and missteps of the farm labor movement and applying it in the 21st century”; “Educators panel: How to institutionalize Filipino American history in K-14 and
beyond”; “Journey for Justice Teachers Guide launch: How to disseminate and
demonstration”; “Moving beyond our backyard: Using art and media to tell stories of Filipino American history on a national stage”

National book tour “Journey for Justice” The Life of Larry Itliong” is kicking off in Delano next month.

The three-day event includes panel discussions, children’s readings, Q & A with the co-author and illustrator, dinner, performances, a dedication mass for Larry Itliong and Dr. Dawn Bohulano Mabalon, and a closing reception.

Itliong co-founded the UFW with Cesar Chavez on August 22, 1966. He organized the Filipino American laborers and became a union organizer for the Agricultural Workers Organizing Committee (AWOC), says a news release. When he led Filipinos in the Great Delano Grape Strike on September 8, 1965, he contacted Cesar Chavez and asked for the Mexican farm workers to join the strike with them.

The farm worker movement became one of the greatest social justice and economic movements in California and the United States.

The children’s book, written by the late historian Dawn Bohulano Mabalon with Gayle Romasanta and illustrated by Andre Sibayan, tells the story of Itliong, his migration to the United States and his lifelong fight for a farm workers union.

“This was the last book that FANHS National Scholar and Trustee Dr. Dawn Bohulano Mabalon wrote before she passed away suddenly on Aug. 10, 2018,” Lawsin said. “FANHS is committed to carry on Dawn’s legacy so that people of all ages can learn more about Filipina/o American history.”