The Bakersfield Museum of Art is showcasing the art of Gustavo Godoy, a Los Angeles based artist whose work stems from concepts of social systems, labor and construction.

The piece, “The Prototype,” is a response to President Donald Trump’s prototype wall at the border, Godoy said.

In “The Prototype,” every piece of metal, lumber, cement or reclaimed objects are placed with purpose and are married together to make a heartfelt statement. Godoy hopes this piece will inspire people to view immigrants as human beings, he said.

The exhibit is on display through May 4.

South Kern Sol sat down with Godoy to talk about this art piece. The conversation has been edited for length and clarity.

Q: What inspired the red masterpiece the Bakersfield Museum of Art is showcasing?

A: I’ve always been really conscious of the border culture. I spent a lot a of time as a kid at my great grandmother’s house in Tijuana, which my dad and his brothers have essentially built from scraps of wood and whatever materials were around. When I became an artist, I learned that your art really needed to be made from who you are, where your history is, what you’re about and what you know. So I knew I kind of always wanted to tell a story of my family but maybe using the language of modernism and abstraction. So I’ve often made artwork with scraps of wood and materials that were recycled and recovered from construction sites and things. But this piece specifically — we took this trip and met with border patrol and worked a group called Peace Works Travel. They took us to this center where nuns were taking care of women who had either been deported from the U.S or were migrating their way to the U.S from other countries in South America, Central America or the Caribbean even. So through that experience we really saw what’s actually going on at the border right now — compared to the story we see on the news. We went to where the Trump prototype walls were. So this piece is kind of my answer to the Trump prototype walls. It’s about people who are actually living right up against the border compared to the kind of dehumanized people that I think a lot of people imagine trying to come to the U.S.

Q: Gustavo, tell me a little bit about yourself?

A: I was born here, but my dad was born in Manzanillo along the pacific coast of Mexico. His father passed away when he was maybe four years old, and the family gradually moved up to Tijuana, and they spent a number of years there before coming across. 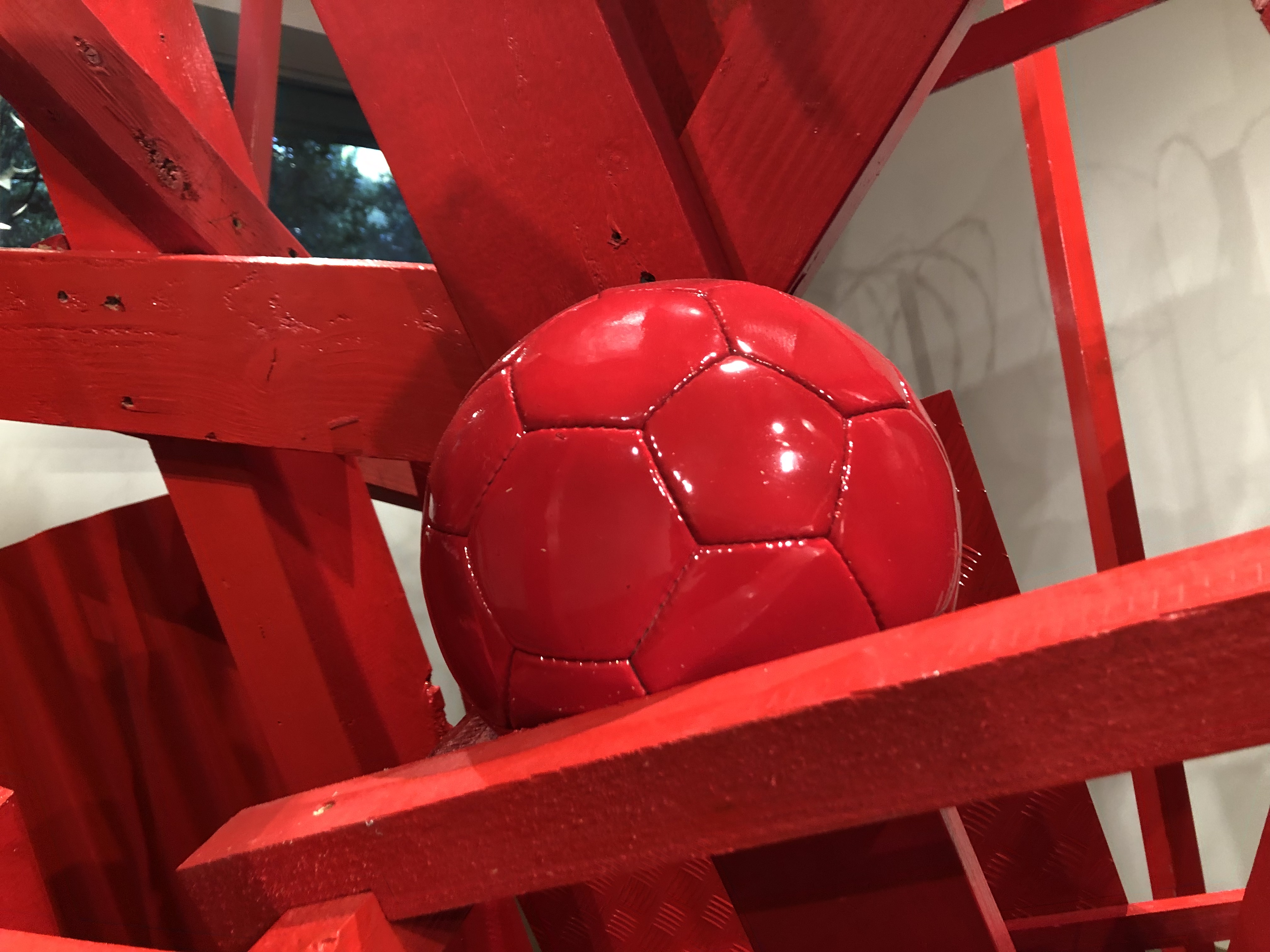 Gustavo Godoy placed a soccer ball in his art piece “The Prototype,” on display at the Bakersfield Museum of Art.

Q: I noticed a soccer ball in between the wall in your art piece. What does it represent?

A: So, on the back side I wanted it to feel really about materials that are trying to keep you out — barbed wire, vertical slats. On the other side, I wanted to remind people that there are human beings involved. There are children that play right up to the fence. Their front yard is right across the dirt road from the Trump prototype walls. A woman who lives right across the border prototype told me a story of how she used to live in L.A. She was deported, and her son is still in L.A. She’s trying to find her way back to her family, but she doesn’t have the money or resources to make it happen. The other objects in the piece are objects you can commonly find in poor neighborhoods. It’s the residue of human life

Q: What kind of message do you hope your art sends to the people in Kern County?

A: My hope is that it starts conversations. When I gave the presentation at the opening, there was one specific man that came to me and pulled me aside and said, “I want to pick your brain. Are you telling me there shouldn’t be a border wall?” I said, “That’s not what I’m saying, although we can talk about the border wall specifically. We’re talking about right now allocating billions of dollars toward a brand new wall when there’s already a wall in place that’s highly successful.” They’re talking about building something even bigger and spending billions of dollars when we have what I described to this man. There are public schools that don’t have libraries for the children. He said, “Why do children need libraries?” I just thought, “wow.” This just tells me exactly where the disconnect is.

Q: What do you want to tell our readers about your art?

A: Well, I think the idea is that art allows you to see the world with fresh eyes — with new eyes. That’s the artist’s job — to show you things, make you think about things that you never thought about them before. With things that are familiar already, you have to rethink them — kind of reconsider them. In a way, I try to lure them in with a Trump red. I hope to start a conversation, and say, “Hey, look we’re talking about human beings.” 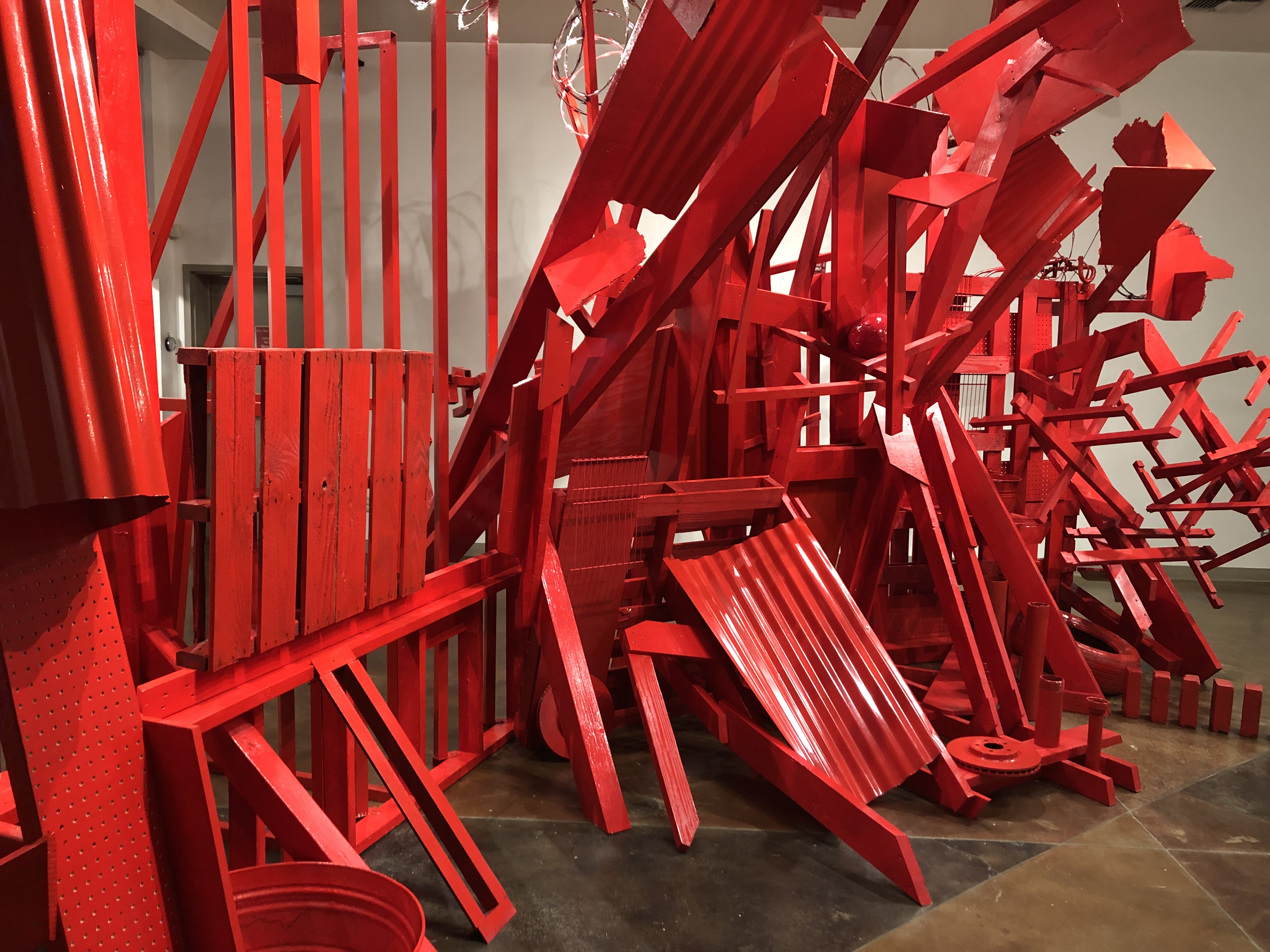 Q: What message do you have for aspiring young artists?

A: I would say if you have the stomach for it, it’s a noble, generous and difficult endeavour. We can try to create a gesture to better the community, to better our culture and all these different things. Please go after it. As much as society tells you that this is not the way to make a living, it’s not a great way to make a living but it’s an important gesture for human beings to engage in.

Q: What attracted you to showcase your artwork in Bakersfield?

A: I taught a course up here at Cal State Bakersfield a number of years ago around 2011. I taught a class that the curator, Rachel Magnus, was a part of. I got an email and a phone call from her saying that she was now the curator of the museum, and she wanted to do a project. Part of the class was building a big sculpture for the university for an exhibition over there. It was working with students as I was building a piece, and they were kind of acting like my assistants and helping set up the exhibition and learning about what it would be like to build an exhibition as an artist.