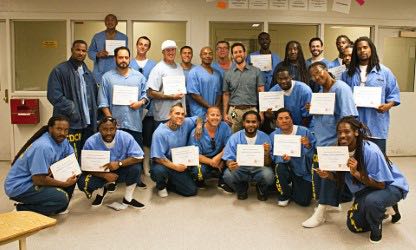 Larry Gonzales is on track to graduate in just two years with a Bachelor’s degree in Sociology from California State University, Bakersfield, but his journey to success has not been the easiest.

The 35 year old has served two prison sentences before beginning his education in the Fall of 2018. He was released in the summer of 2017. Gonzales decided while incarcerated, he wanted to begin his educational pathway after coming across a pamphlet covering CSUB’s Project Rebound, a program that supports the success of the formerly incarcerated by offering the opportunity and resources needed to successfully transition and acclimate to a college campus. Soon after, he decided to take the college entrance exam.

“Club RISE has been such an amazing way to reach out and speak on the issue of formerly incarcerated students,” said Gonzales, the current president of Club Rise. “It’s a college level platform that gets noticed for being apart of academia and university life, not for being a felon.”

Club RISE and Project Rebound are just a couple of programs offered on campus to help formerly incarcerated students and promote awareness for the community.

However, the campus is doing more to engage incarcerated individuals. CSUB’s Kegley Institute of Ethics began an initiative called Humanities Beyond Bars, which helps current and formerly incarcerated students by providing ethical education resources and promoting critical conversations in our community.

HBB began in the Fall of 2018. Initiative Co-Directors Michael Burroughs and Nate Olson began two projects at two different prisons simultaneously. Burroughs started doing Philosophy and Ethic Seminars at North State Kern Prison with 25 incarcerated students and Olson was doing an Ethics Bowl initiative at Tehachapi Prison. Since then, they have done three competitions with CSUB students and incarcerated students. Together, they set the visions and create collaborations.

“I think (Humanities Behind Bars) helps people connect with a different side of themselves and that’s a comment that incarcerated students make — that it meant a lot to be treated as somebody who has something to say and also to engage (with) each other — fellow inmates — as people who have philosophical ideas and things to say,” Burroughs said. “That experience, although simple in some ways, is probably one of the most powerful things that come out of programs like this.”

Since then, the initiative has grown by bringing in guest speakers to the CSUB campus such as activist Angela Davis, Homeboys Industries founder Gregory Boyle, Fresno State Criminology Professor Barbara Owen, and more.

HBB is still a growing initiative and with the help of more funding, permitted from a grant, the Kegley Institute of Ethics hopes to create additional programs, expand to more prisons, and allow for more guest speakers to speak on campus.

Prior to a seminar at NSKP, incarcerated students receive a reading. Previous topics have included Dr. King’s Letter of Birmingham Jail, Plato’s Apology, and the purpose of education. Lasting an hour to an hour and a half, the conversation allows everyone the chance to engage with one another and discuss the central questions related to the given reading.

“The students are very talented, very engaged, and authentically interested in the philosophical questions,” Burroughs said. “Honestly, some of the highest quality philosophy sessions I’ve had actually have been in prisons.”

During an Ethics Bowl debate, each team is presented a case study involving an ethical issue such as academic integrity or a current political issues. Each team is to present an ethical analysis and argument by supporting reasons as to what they believe to be the best ethical resolution for the given case. Each of these components are taken into account on the judges final decision.

“For the [men] and women who are incarcerated, having a chance to engage ideas, learn, and have a space to share ideas in discussion with others is something that can be a positive in an otherwise pretty challenging situation,” Burroughs said.

Gonzales, who hopes to be an educator of social worker for formerly incarcerated individuals, is one of the many examples who has changed his life for the better post incarceration with help from CSUB’s programs.

“My biggest takeaway is that I now have an outlet to do positive things and help others,” Gonzales said. “My advice would be to seek education…If the opportunity to learn and be better is given, it really helps people — myself included.”

Burroughs acknowledges the many programs that help those current and formerly incarcerated students such as the Prison University Project, Previously/Presently Incarcerated and Educated, Bakersfield College Inmate Scholar Program, BC Free on the Outside club, CSUB Project Rebound, CSUB Club Rise, all who share the same goals that are; to help formerly incarcerated students work towards a degree, gain additional skill sets and knowledge to improve their life post incarceration, be a mentor, connect these students to resources, and lower recidivism rates.

“The role that we are playing as an institute [is] being a hub for helping create collaborations between people,” Burroughs said. “We were doing work in prison but also creating community conversations around ethical and political issues related to incarceration.”